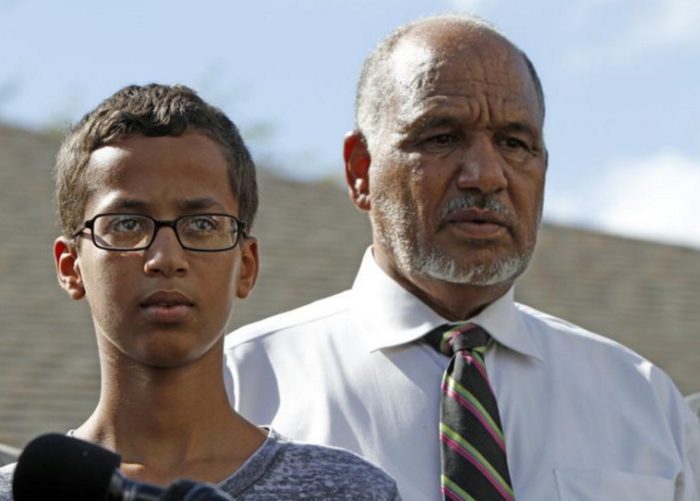 I wish this family would just go away asap. Why could they have not stayed in whatever middle eastern country they went to? Surely their 15 minutes were up long ago. Perhaps that is why he is suing: to start the clock running again. See something, say something, but just be prepared to be called a racist by Obama and on top of that now you’ll get sued by this family.

Not to be confused with his lawsuit filed last month against the Irvine, Texas School District.

The father of Ahmed Mohamed — the Irving teenager who became known as clock boy around the world after he was arrested for bringing a homemade alarm clock to school — sued for defamation Monday.

Mohamed Mohamed sued on behalf of himself and his son, arguing that commentators and media outlets were responsible for libelous statements after his son’s arrest in 2015.

“The Mohamed family are peaceful Muslims who have been falsely accused of being terrorists and engaging in a jihad,” the suit states. “The correction must also be made that the arrest and suspension of Ahmed Mohamed was not a stunt and it was not pre-planned, staged or engineered by anyone, including [his father].”

The lawsuit comes a month after the Mohamed family announced a federal lawsuit against the city of Irving and its school district, alleging that the boy’s rights were violated after Irving police mistook his homemade clock for a bomb.