This poor little snowflake, happy to let everyone know how he feels whether it’s an appropriate time or not. Unwilling to act like an adult and respectfully listen to another person’s point of view. This is precisely what is wrong with America today.

I’m sure Maxine Waters would have been a far better-received speaker. 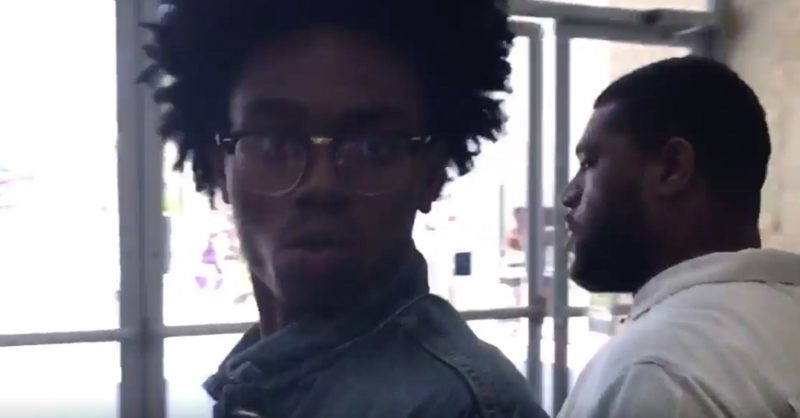 100%FedUp: The students of the historically black Bethune-Cookman University booed the invited commencement speaker, Education Secretary Betsy DeVos. They yelled over her speech, they even turned their backs on her. For 25 minutes the students at Bethune Cookman reminded us just how far Obama has divided our nation.

A sophomore student at Bethune-Cookman, a historically black university, filmed himself running around with his phone as he yelled for the seniors to stand and rebuke Betsy DeVos during her commencement speech. He implored the graduating seniors to disrupt her speech by yelling and standing with their backs to  DeVos, who bravely persevered through her speech in spite of their embarrassing behavior.

The student, who says his name is “Bobbie Luke” and identifies himself as a “StuPid NiGGA” on his Twitter account, was eventually thrown out of the venue by campus security. CNN breathlessly followed the student as he was being thrown out, hoping to get an intelligent response from the student about why he was whipping the graduating seniors into a frenzy over Secretary of Education Betsy DeVos’ commencement speech. What they got however, was a big disappointment.

Here’s the video that was taken by @bobbieluke on his cell phone of the graduating seniors responding to his pleas to disrupt and disrespect their commencement speaker:

BCU17. We Salute you all standing up for what is right and blocking out @BetsyDeVosED pic.twitter.com/dRguU6EIYC

Here’s another video taken from the audience that shows Bobbie Luke walking down the aisle encouraging the students to stand with their backs to DeVos :

Betsy DeVos gets booed by black students. Unbelievable idiocy. She’s pushing for school CHOICE that will help BLACK students the most! pic.twitter.com/4TZCQ1hVqM

Here’s the video taken by CNN reporter Nick Valencia that exposes Bobbie Luke’s embarrassing attempt to explain why he chose to lead the disrespectful rebuke of Betsy DeVos at the senior’s graduation ceremony. When asked by the CNN reporter what he was standing up for, Luke replied: “I don’t like what she said and nothing at the end of the day is going to change my opinion. Basically, if you not, if you not, basically if you let money devalue your morals, I’m not trying to hear. That’s all I got to say.” As Bobbie Luke is walking away, he can be heard saying,“I like your suit.” (Bobbie Luke essentially ends the interview by saying he likes the CNN reporter’s nice [expensive?] suit that was purchased with money, that according to Luke,”devalues morals”…LOL!)

One demonstrator escorted out of @BetsyDeVos speech. pic.twitter.com/VmssgmakMR

Liberal hack Matt Lauer, host of the Today Show did a story on the disrespectful behavior of the graduates. As usual, Lauer couldn’t help himself from attempting to make it look like DeVos was the villain in the story. More

Condoleezza Rice Smacks Down The Ladies Of ‘The View’ (Video)