Kaperprick’s views may fly well with San Francisco socialists and communists, but for thinking people anywhere else he’s just an idiot…

This ignorant person takes every opportunity to insult the American people and the greatest nation on the planet, this time while promoting a vile dictator. I’m pretty sure the Cuban Dolphins fans will have a few things to say to him. 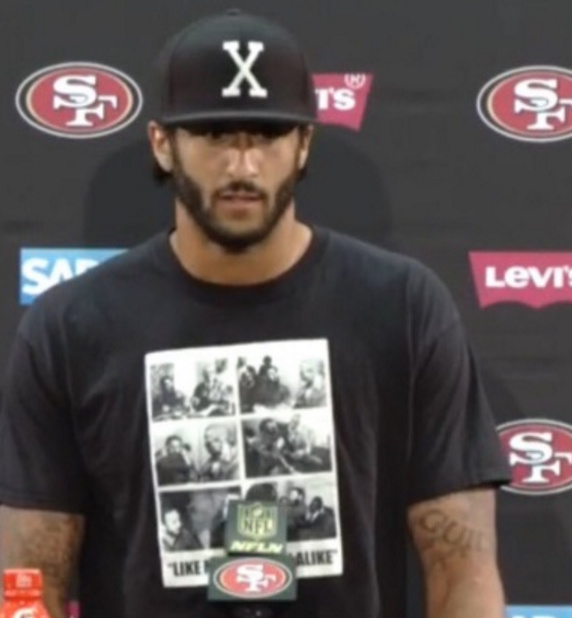 Mr. Kaepernick, who has sought to draw attention to a litany of causes célèbres this football season by kneeling during the pre-game National Anthem, was grilled by Miami media ahead of Sunday’s game against the Dolphins for his perceived support of the Communist dictator.

The embattled quarterback, who was spotted in a T-shirt depicting Mr. Castro earlier this year, initially demurred when asked about the shirt by a reporter from the Miami Herald who comes from a family of Cuban exiles. He pointed out that the shirt also pictured Malcolm X.

“I’m not talking about Fidel Castro and his oppression,” Mr. Kaepernick said on Wednesday’s press call, the Palm Beach Post reported. “I’m talking about Malcolm X and what he’s done for people.”

But when pressed on the point, he praised the Cuban autocrat’s comparative commitment to education and criminal justice reform.

“One thing that Fidel Castro did do is they have the highest literacy rate because they invest more in their education system than they do in their prison system, which we do not do here, even though we’re fully capable of doing that,” Mr. Kaepernick said.

When the reporter rebutted that Mr. Castro broke up countless families during his half-century, one-man reign over the oppressed island nation, Mr. Kaepernick said the United States breaks up plenty of families, too. More