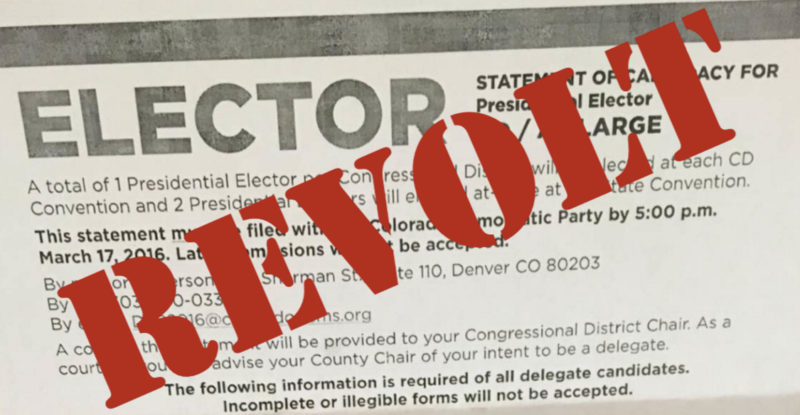 These whining, sniveling crybabies just keep reminding us of why we voted them out in the first place. Being an elector is voluntary, not compulsory. This means they agreed to the rules and to uphold the law when they became electors. Throw them in jail for fraud.

Four of Colorado’s nine Electoral College electors plan to challenge a state law that would prevent a long-shot bid to keep President-elect Donald Trump out of the White House.

Robert Nemanich, of Colorado Springs, said Saturday he and three other electors intend to sue Colorado’s governor, attorney general, secretary of state and state Democratic Party chairman claiming state law requiring electors to vote for the presidential and vice presidential candidates “who received the highest number of votes at the preceding general election in this state,” is unconstitutional.

Democratic candidate Hillary Clinton won Colorado – and the popular vote nationwide – but lost the election to Trump, who captured the needed Electoral College votes to win the presidency.

The four electors hope that if the law is struck down, Colorado’s electors can join forces with other Democrats pledged to Clinton and disaffected Republicans pledged to Trump to find an alternative Republican acceptable to both sides, Nemanich said.

“There are Republicans and Democrats now willing to look for a solution to Donald Trump (being elected).” he said. “The linchpin comes down to whether there are enough Republicans to join.”

Eight of Colorado’s nine electors have voiced support for the lawsuit, which Nemanich said would be filed Monday.

The plan would require that 270 electors agree to vote for a presidential candidate that was not on the ballot.

If electors pick the candidate they’ve pledged to pick, as they’ve done in past elections, Trump would win the presidency by 37 votes. Because Colorado residents elected Clinton, all of the state’s nine votes would go to the Democratic presidential candidate.  More

Angry, Bitter Sally Field Joins Twitter To Find Out How People Could Have Voted For Trump