The idea of citizen soldiers is as old the American Republic, so not only did the FBI refuse to call this Islamic terrorism, they turned their focus on armed American citizens trying to protect our military. 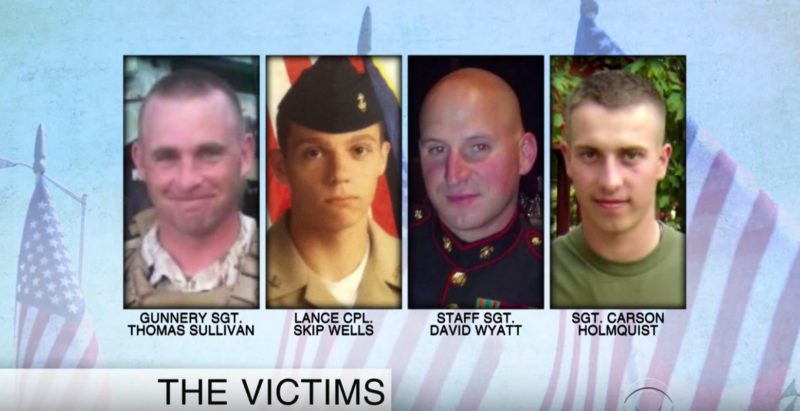 The killer traveled to Jordan for several months the year before the mass shooting of the unarmed military recruiter’s office.

Abdulazeez kept a blog where he wrote two posts on July 13––just days ago––about his thoughts on Islam.
(His blog has since been deleted.)

U.S. authorities are looking into a trip to the Middle East last year by Mohammad Youssuf Abdulazeez, the gunman who killed four Marines in attacks on military centers in Chattanooga, Tennessee.

He left the United States in April, returned in November and traveled through Jordan.

Abdulazeez, 24, was born in Kuwait. The Kuwaiti Interior Ministry said Friday that he was of Jordanian origin.

Abdulazeez may have also traveled to Yemen.

FBI Chief James Comey released a statement the day after the shooting announcing they were investigating the shooter’s motive.

FBI Statement on Shootings at Military Facilities in Chattanooga, Tennessee

The FBI’s Knoxville Field Office, along with the Chattanooga Police Department and other law enforcement partners, are working jointly to investigate today’s shootings at a military recruitment center and a reserve center in Chattanooga, Tennessee in which four individuals were killed and three injured. The shooter, Mohammod Youssuf Abdulazeez, 24, is also deceased. While it would be premature to speculate on the motives of the shooter at this time, we will conduct a thorough investigation of this tragedy and provide updates as they are available.

In December the Comey admitted the bureau still had no idea what motivated Abdulazeez to kill the innocent Marines and sailor on the July day.

The FBI under Comey was completely baffled.

No doubt this was the conclusion Obama wanted.

The public may never know what motivated a 24-year-old Chattanooga man to kill four Marines and a sailor in an attack on Chattanooga’s U.S. Naval and Marine Reserve Center last July.

Investigators have said Muhammad Youssef Abdulazeez was a homegrown violent extremist but have not offered more details about what motivated the attack that began at a military recruiting center and ended when Abdulazeez was shot to death by police who followed him to the reserve center.

“We’re still trying to make sure we understand Abdulazeez, his motivations and associations, in a really good way,” FBI Director James Comey told reporters during a visit to Nashville’s FBI field office on Friday.

Comey said he understands the public interest in the shooting, but he did not know whether there would ever be a public report on it.

“Sometimes the way we investigate requires us to keep information secret. That’s a good thing. We don’t want to smear people,” he said.