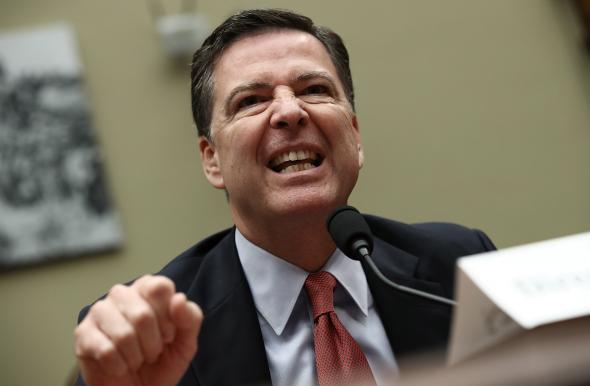 But what are Comey and the FBI doing about these hackers? “Looking into it” Because that was helpful with all the Hillary emails.

FBI Director James Comey said Wednesday there is evidence that there have been additional attempts to hack state voter registration systems than those that were previously known. Comey didn’t elaborate on the number of attempts or verify where they came from during his House Judiciary Committee testimony, but there has been concern that Russian operatives, in particular, could be able to cause havoc in the election process. Comey said the FBI is looking “very, very hard” at the Russian links and the agency issued a cyber-security warning to state and county voter registration offices last month.

“There have been a variety of scanning activities which is a preamble for potential intrusion activities as well as some attempted intrusions at voter database registrations beyond those we knew about in July and August. We are urging the states just to make sure that their deadbolts are thrown and their locks are on and to get the best information they can from DHS just to make sure their systems are secure,” Comey said. “Because there’s no doubt that some bad actors have been poking around.”

“In no cases was information changed, nor were any actual voting systems at risk. Comey reiterated to Congress that those actual voting systems are not connected to the Internet and are decentralized, making broad hacking of the election nearly impossible,” CNN notes. “Hacking attempts are also not a cause for panic. Voting registration databases have always been appealing targets for hackers, who can use personal information for financial crime.”