Comey Investigated The Clinton’s Four Times: Let Them Off Each Time While He & His Family Benefited

When you really look into the firing of James Comey it was a giant step in the direction of draining the swamp.

Comey had to go! Now its time to get rid of interim FBI head McCabe or we’ll still get nowhere. He and his wife are deeply entrenched with the Clintons. Just shows you how many years it took to develop the deep state. Twenty-one years and no one from either party ever called out James Comey for the conflicts. 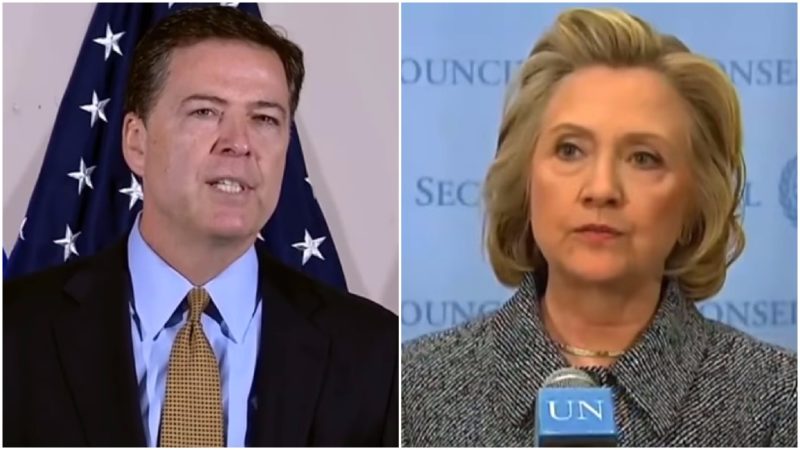 TGP by Joe Hoft: Former FBI Director James Comey was involved in at least four different Clinton scandals and in all cases he let them off!

Comey’s first encounter with the Clinton’s was in 1996 when he:

served as deputy special counsel to the Senate special committee on the Whitewater investigation, chaired by Republicans at the time, which linked Hillary Clinton to the mishandling and destruction of documents.”

allegations that the Clintons took part in a fraud connected to a Arkansas real estate venture gone bust. No charges were ever brought against either Clinton, but the scandal would eventually lead to independent counsel Kenneth Starr’s probe that would result in the Lewinsky scandal.”

Comey next was involved with the Clintons when in the early 2000’s when he was:

involved at both ends of the case of Marc Rich, a billionaire oil trader indicted for tax fraud and trading with Iran during the hostage crisis, who was later pardoned by President Bill Clinton during his final day in office in 2001. In a letter to the Senate, Comey describes working as both the lead prosecutor in New York on the original case against Rich in 1983 and then later, in 2002, overseeing criminal investigations into Clinton’s last-minute pardons.

The investigations concluded there was no wrongdoing on the president’s part, despite public outcry over evidence that Rich’s ex-wife had donated to Hillary Clinton’s Senate campaign.”

Comey’s third encounter with the Clintons came before the 2016 Presidential election.  Hillary Clinton set up a private email server that she used when Secretary of State under the Obama Administration. Government employees are mandated to use government email accounts similar to employees in the private sector.  Hillary allowed others on her team to use her private email system as well, including Huma Abedin, her assistant and close confidant.

Through a series of events Hillary’s email system was discovered and the FBI and Comey got involved. One question that needed to be answered was whether Hillary’s actions with her emails led to gross negligence with national defense information which would be a serious crime according to the Espionage Act of 1913.

Hillary went to great lengths to hide the fact that she was using a private email server and made many excuses which later turned out to be lies. For example, she claimed that she didn’t know a ‘C’ on her emails meant classified. Unfortunately, her emails contained at least five different emails that contained information on the exact location or travel plans of US Ambassador Chris Stevens, who was murdered in Benghazi.  His killers knew exactly where he was going to be when they got him.

Clinton’s team eventually deleted her emails and then cleaned her server with a program called ‘Bleachbit’. They did this after these items were requested in subpoenas from Congress.

On June 27th Bill Clinton met with US Attorney General Loretta Lynch in her plane in Arizona for a half an hour.  Comey never commented on this meeting but within a week Lynch’s Department of Justice dropped the investigation into Hillary’s emails and FBI’s Comey made the announcement.  Comey’s statements were later compared to Hillary’s prior statements –

After FBI Director Comey announced that the FBI would not recommend criminal charges be filed against Hillary, he was grilled in Congress by US Representative Trey Gowdy –

Americans were very upset with the FBI announcing that criminal charges were not recommended against Hillary Clinton regarding her emails.  Anyone who looked into it knew she was guilty of numerous crimes.

Comey’s fourth encounter with the Clinton’s came in late October 2016 when it was announced that the FBI was reopening its investigation into Hillary’s emails.  Apparently emails recovered in the pervert Anthony Wiener case ended up being related to the Hillary investigation.  Wiener is the husband of Clinton confidant Huma Abedin and reportedly Clinton emails were found on Huma’s computer after Huma stated under oath that all her emails were turned over.  At about the same time an email released from WikiLeaks showed that Hillary’s longtime assistant Cheryl Mills ordered Hillary’s email server to be bleached clean.

None of this mattered to Comey as a few days later, Comey announced that he was letting Hillary off again with no charges filed.

Comey served as general counsel at Lockheed Martin until 2010 when he departed with over $6 million to show for it. That same year Lockheed Martin became a member of the Clinton Global Initiative and “won 17 contracts from the U.S. State Department, which was led by then-Secretary of State Hillary Clinton,” Big League Politics reports.

Comey just so happened to have joined the board of the British bank HSBC Holdings in 2013, which just so happens to be a Clinton Foundation partner.

However, one of the most important conflicts of interest is Comey’s brother Peter Comey’s role at the Washington law firm DLA Piper, where he serves as “Senior Director of Real Estate Operations for the Americas”.

As Big League Politics reported, “DLA Piper’s offices [shortly before the election]. . . confirmed that the law firm immediately [patched]callers through to Peter Comey’s direct line there.”

Property records show that James Comey owns the mortgage on his brother Peter Comey’s house in Virginia. Therefore, James Comey had a direct financial relationship with a DLA Piper executive at the time he was investigating Clinton. More

Comey Investigated The Clinton’s Four Times: Let Them Off Each Time While He & His Family Benefited