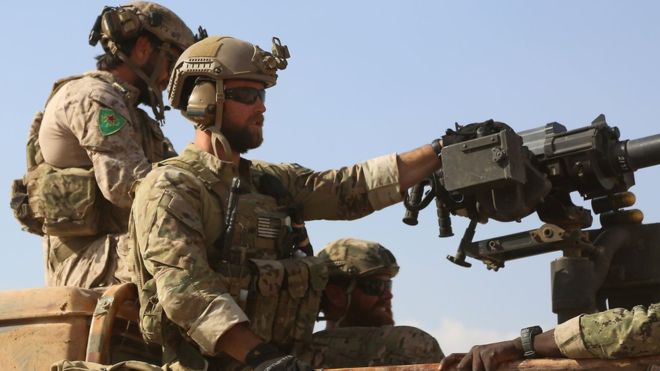 These U.S. Commandos killed 25 Jihadi fighters and a midlevel ISIS leader in the raid in eastern Syria. 25 less ISIS fighters to worry about.

United States Special Operations forces carried out a ground raid that killed an Islamic State leader in eastern Syria on Sunday, the Pentagon said, underscoring how the military is using risky commando missions and not just airstrikes to battle the militants.

A Defense Department spokesman, Capt. Jeff Davis, confirmed on Monday that the operation had occurred. But he dismissed a report by the Syrian Observatory for Human Rights, a monitoring group based in London, that about 25 fighters had been killed in a two-hour raid in al-Kubar, a village in Deir al-Zour Province.

Captain Davis said that figure overstated the casualties by “orders of magnitude,” but he declined to say how many militants had been killed. He said no fighters had been detained in the operation, which did not involve rescuing any hostages, contrary to what some news reports indicated earlier on Monday.

A senior Defense Department official, who spoke on the condition of anonymity to discuss details of the operation, said the target of the raid was a midlevel Islamic State leader the American commandos were trying to capture and interrogate. But when the helicopter-borne commandos intercepted the vehicle carrying the leader, a firefight broke out and the suspect and another person in the car were killed. No Americans were injured.

Deir al-Zour, an oil-rich province that borders Iraq, is largely under Islamic State control and has been the focus of American-led airstrikes and other military action.

Since early 2015, the jihadists have besieged the provincial capital, also called Deir al-Zour, where about 200,000 people live. The Islamic State, also known as ISIS or ISIL, controls roughly half of the city, while the rest is held by forces loyal to President Bashar al-Assad of Syria.

Captain Davis said the raid was by the so-called expeditionary targeting force, a group of commandos from the secretive Joint Special Operations Command who target Islamic State leaders and fighters in Iraq and Syria. More