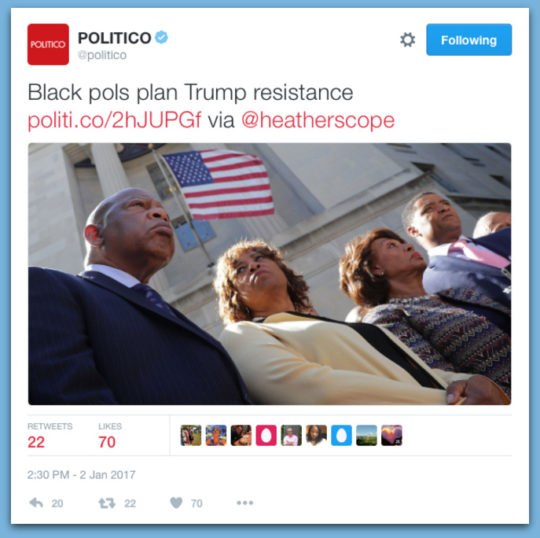 So big deal, they were going to vote against anything any Republican anyway .

After eight years of the nation’s first African-American president, black lawmakers were in for an adjustment no matter who won the White House.

But members of the Congressional Black Caucus say they’re bracing for the worst in Donald Trump, fearing a presidency that could set minorities back decades.

Leaders of the group told POLITICO they have already begun discussing strategies to deal with Trump and any policies they believe would disenfranchise African-Americans — from public school funding to low-income housing to voting restrictions. Though the president-elect’s supporters call the alarm unwarranted, black lawmakers say Trump’s campaign and his Cabinet picks more than justify their concern.

“The stakes are incredibly high and our community is counting on us as the last line of defense between Donald Trump and the worst of what America could offer,” Rep. Hakeem Jeffries (D-N.Y.) said.

“This is not the normal incoming president,” added Rep. Emanuel Cleaver (D-Mo.). “We had no plan for George Bush. I think Charlie Rangel and John Conyers would tell you they didn’t even have a plan for Richard Nixon. But this is not the norm.”

Incoming CBC Chairman Cedric Richmond (D-La.) is expected to outline his priorities for the new administration when he officially takes the reins of the caucus on Tuesday. Some members suggested challenging Trump on his home turf — Twitter — while others advocated nonviolent protests reminiscent of the civil rights movement. More

NY Times: People In Texas Will Buy Trucks Even If They Don’t Need Them