The conservatives who disrupted the Trump assassination play speak out: “It was like a gang stabbing… I watched everyone cheering his death, laughing, clapping along… children in the audience. It made my blood run cold… no better than ISIS.”

Thank you, Laura and Jack, for your extreme courage to stand up against this disgusting disgraceful presentation! 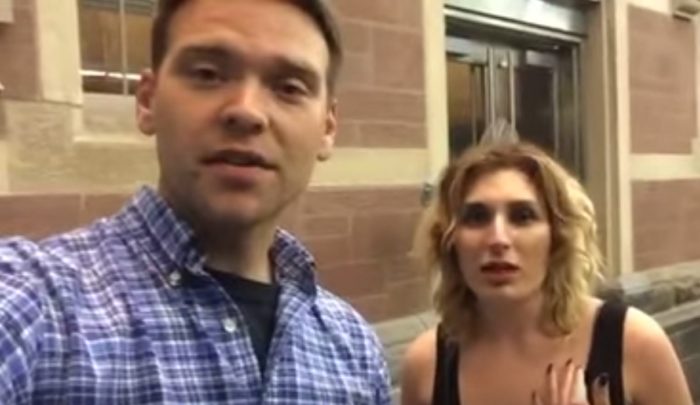 100%FedUp: Laura Loomer of Rebel Media and citizen journalist Jack Posobiac disrupted the Central Park performance of “Julius Caesar” or more accurately the “Trump Assassination” play last night. At the point where “Julius Caesar,” (who is intentionally made to look like President Trump) is about to be stabbed by a gang of minorities, Loomer rushed the stage and admonished the cast and audience for promoting violence against our current president and against Republicans in general.

Only 3 days ago, an unhinged Democrat opened fire on Republican House members at a baseball practice for a charity game against Democrats Congressmen. Representative Steve Scalise (R-LA) remains in critical condition. Doctors who were in attendance when the married father of 2 arrived at the hospital have now revealed that Scalise was very near to death when he arrived. Democrats like George Soros continue to fund violence against opposing voices, Barack Obama, former AG Loretta Lynch, Hillary Clinton and her running mate Tim Kaine have all advocated for action and/or violence against Trump supporters.  Liberal professors promote hate and disrespect for anyone with opposing political views and have made their classrooms a hostile environment for students who dare to speak up or speak out against their radical views. Hollywood has come unhinged, and there doesn’t appear to a line they won’t cross when it comes to promoting violence against Americans who openly support President Trump. The left has shown themselves to be the largest collection of bullies and domestic terrorists this nation has ever seen.

At about the 4:30 mark in the video, Laura Loomer, who is a fan of theater recites a Shakespeare line, “Violent delights have violent ends.” She then looks into the camera and calls out Hollywood and the left for the violence against Trump supporters and Republicans, “Just like Shakespeare said; If you’re delighting in this violence, this normalized political violence against the right, it’s going to have a violent end. Loomer goes on to point out how liberals like Kathy Griffin and the CNN network who glorify those who commit or threaten violence are responsible for this violent atmosphere, and that they’re no better than ISIS. Loomer points out the comparisons between the actors on the Central Park stage who are “gang stabbing” President Trump: “I just couldn’t help but think to myself: ‘Wow! When you’re holding a knife to someone’s throat in the play, and joking about chopping someone’s throats off, what makes you any better than ISIS?”

Jack Posobiac makes a very interesting point at about the gang stabbing of President Trump: “It was like a gang stabbing. All the people stabbing him were minorities.” Loomer agrees and goes a step further by suggesting the producers were “racists” because they chose all black actors to stab President Trump.

Citizen journalist and author of Gorilla Mindset, Mike Chernovich called on Americans to join him in disrupting the Trump Assassination play 2 days ago:

Who wants to go watch the Trump assassination play…maybe use some “free speech” during the play?https://t.co/64WAPvQjBT pic.twitter.com/7zDQcjNX7y

Twitter followers of Chernovich responded by suggesting they skip the ticket process and instead use the same techniques as leftist agitators, like whistles and drums or bongos and cowbells to disrupt the production. Chernovich is all about using the tactics of the left against them. There has never been a better time to shut down the violent left in a non-violent way. To stand back and allow a performance of our president being “gang stabbed” is about as horrible as it gets:

bongos and cowbells for everyone