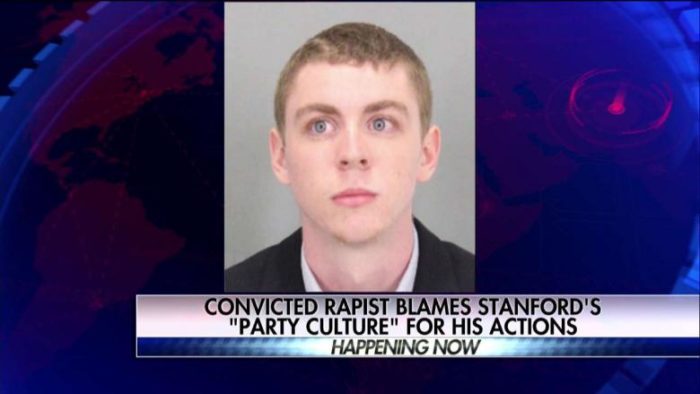 This case just keeps getting worse and worse. This rapist just keeps evading punishment and the victim is having to relive all of this over and over again.

Police believe Stanford rapist Brock Turner sent a photo of his victim’s breast to friends, according to multiple reports about the controversial case.

The message was sent via a group-messaging app called GroupMe, according to recently-released court documents.

Prosecutors, however, explained that investigators could not recover the photo because it was deleted from the app and was not stored on Turner’s phone.

One of Turner’s Stanford swimming teammates, Justin Buck, wrote in the group chat, “WHOS [sic]TIT IS THAT.” Detectives noticed the message on Turner’s phone shortly after his arrest.

Authorities said that the victim was found with one breast exposed after her bra was pushed up. In the complaint, a witness also reported that he saw a man standing over the victim with a cell phone pointed at her.

“He approached the subject and asked everything was okay. The male subject did not saying anything,” the complaint stated.

By the time authorities obtained a search warrant to go through the phone, the picture had been deleted by another member of the group chat.

Evidence from Turner’s phone is also coming under scrutiny because it showed a history of drug use and drug purchases.

Before his sentence, Turner wrote to the judge that he had “never really experienced celebrating or partying that involved alcohol” before arriving at Stanford.

Turner’s sentence drew national outrage because he received just six months in jail out of a possible sentence of 14 years in prison.

Turner, 20, assaulted the 23-year-old female, who was not a student at the university, after she passed out behind a dumpster at a frat party.

A petition to oust Judge Aaron Persky over the light sentence has been signed by more than 1.2 million people.