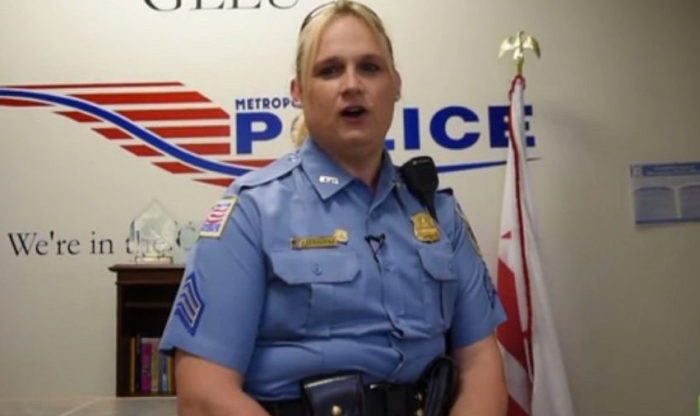 So a pervert does perverted things. Go figure. Anyone surprised?

A transgender police officer in Washington, D.C., who has repeatedly been praised as a community role model has also quietly been reprimanded for improper sexually-tinged antics with underage police interns.

In a story published Thursday night, NBC4 News profiled Jessica Hawkins as a police officer who “helps build trust in [the]D.C. community” due to his work on an LGBT outreach unit. Hawkins, who previously went by Billy, is biologically male but identifies as a woman, and publicly transitioned two years ago.

NBC4’s story is just the latest positive one about Hawkins, who has also been profiled by NPR, Metro Weekly and other outlets.

But a new report by local D.C. station Fox 5 shows another, more disturbing side of Hawkins that hasn’t appeared in profiles. According to the report, Hawkins has repeatedly landed in hot water because of his conduct around interns for D.C.’s police department.

“Sgt. Hawkins showed the interns a ‘homemade video of her having sex with 4 men while she was intoxicated,’” Fox’s report says. Another complaint filed against Hawkins accused him of taking under-21 interns to an Arlington gay bar, where she helped them buy alcohol and laughed at one intern’s possession of a fake ID.

According to Fox, Hawkins has admitted that both complaints against him are accurate, and was quite cavalier in the admission. Hawkins even volunteered that he had shown other interns an inappropriate picture on his phone.

In a statement, D.C. police told Fox that Hawkins’ case is still ongoing.

“That investigation has concluded and the findings are currently with the MPD’s disciplinary review division,” the statement said. “The DRD will review and determine an appropriate penalty. Throughout the investigation, Sergeant Hawkins remained in her current assignment and is still widely considered a valuable MPD team member in our special liaison division.”