So, let me get this straight. A member of congress, without the White House’s knowledge, traveled to Syria, spoke with Assad, and now condemns Trump for his missile strike following the death of innocent men, women, and children.

Did I get it right? It seems to me this democrat needs a lesson in transparency and should be questioned about her knowledge of Syrian leadership. 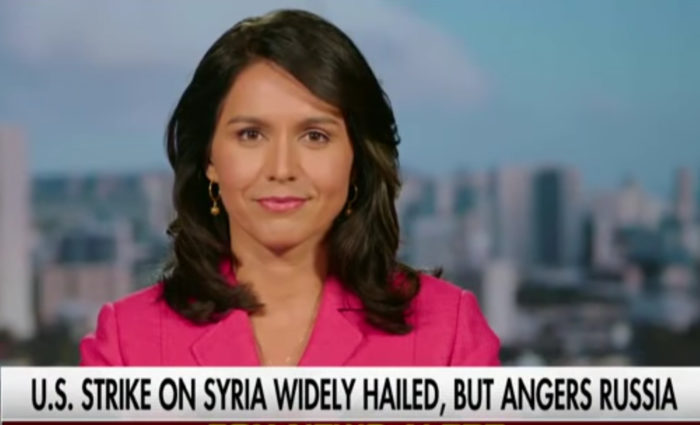 “It angers and saddens me that President Trump has taken the advice of war hawks and escalated our illegal regime change war to overthrow the Syrian government,” Gabbard said. “This administration has acted recklessly without care or consideration of the dire consequences of the United States attack on Syria without waiting for the collection of evidence from the scene of the chemical poisoning.”[…]

The Hawaii Democrat did not provide advanced warning about her trip to House Speaker Paul Ryan (R., Wis.) or House Minority Leader Nancy Pelosi (D., Calif.), despite it being standard practice to do so. She also did not comply with House ethics rules by not filing necessary forms disclosing who paid for her trip as well as who else she may have met within the war-torn country. More

History Teacher: ‘Trump Must Hang,’ Two Republicans Should Be Executed For Each Alien Deported