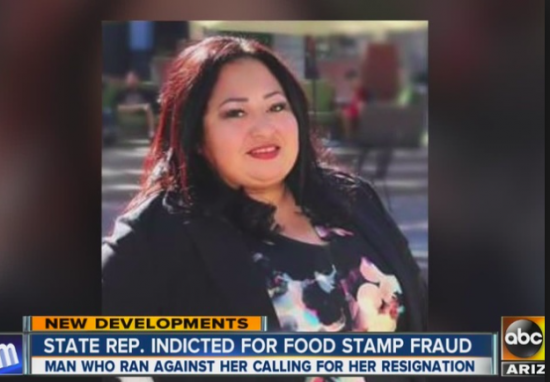 A Democrat who lies, steals, and cheats the government out of money?? No way! Someone must inform Hillary about this new finding!

An Arizona Democratic lawmaker who once voted against welfare fraud protections in her state has been indicted on felony charges of defrauding the food stamp program.

According to the indictment unsealed earlier this week, state Rep. Cecilia Velasquez was charged with three felony counts: unlawful use of food stamps, fraudulent schemes and practices, and theft.

The Arizona Department of Economic Security began investigating Velasquez in 2014. According to the Arizona DES, Velasquez fraudulently used $1,726 worth of food stamps between 2013 and 2015.

This past February, Velasquez had voted against a bill aimed at giving the same state agency stronger anti-fraud tools – a program that could have quickly detected her alleged fraudulent activity.

“It is appalling that an elected official representing the people of Arizona would steal from the poor, while consistently saying she is trying to help the poor,” Kern told Fox News.

Josh Archambault, senior fellow with the Foundation for Government Accountability, pointed to the failed legislation as the kind of measures the country needs to tackle fraud.

“There is so much low-hanging fruit to catch in this country when it comes to welfare fraud, and sadly, every day that goes by without reform allows for abuse and steals resources from the truly needy,” Archambault told Fox News.

Velasquez’s indictment was announced this week after an investigation by several state agencies.

According to Arizona Inspector General Juan J. Arcellana, the investigation began with a tip in November 2014.

“The indictment of State Representative Velasquez is the culmination of an extensive multi-year investigation,” Arcellana said in a statement. “The forthcoming judicial proceedings will ensure due process for the involved parties.”

Velasquez’s office has not responded to Fox News’ request for comment.

The initial hearing is set for July 5 in Maricopa County Superior Court. More