The “useful idiots” within the communist democrat party will never mature past the stage of being teen juvenile delinquents. These people are wholly inadequate to be the leaders of anything.

The Delkab County Democrats projected “F*** Trump” on the outside of the stadium, tweeting “Welcome to Atlanta where the players play and where the Democratic Socialists have an awesome projector like every day. (You’re not welcome in District 5 or anywhere else in ATL you orange fascist.”)

However, the Dekalb County Democrats approvingly promoted the ‘F*** Trump’ message and added their own hateful message to President Trump.

Welcome to Atlanta where the players play and where the Democratic Socialists have an awesome projector like every day.
(You’re not welcome in District 5 or anywhere else in ATL you orange fascist. ) pic.twitter.com/7c7lkCJXGL

Hey @Lindsay_Schnell! In your article for @usatodaysports, you wrote that Dekalb County Democrats did the projections at MB Stadium. It wasn’t them, it was us! A correction would be cool. Thanks! Copy of photo in case of deletion: 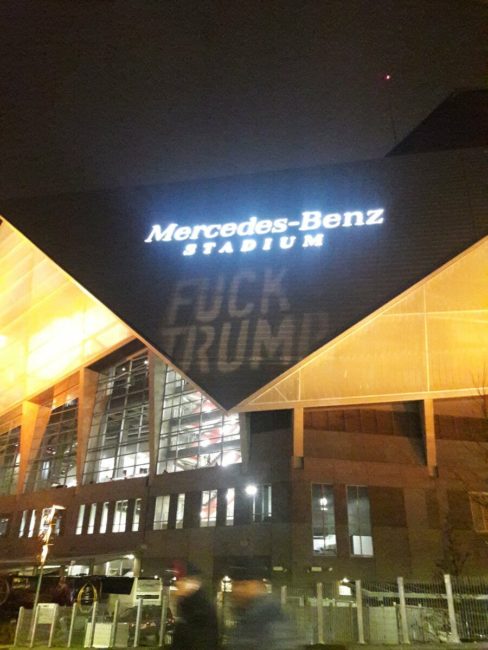 The Sporting News posted video of Alabama player Bo Scarbrough yelling, “F*** Trump!” as the team headed to the field before the game.

If Republicans did this to President Obama, all hell would break loose. But, Democrats… Read more at TGP.