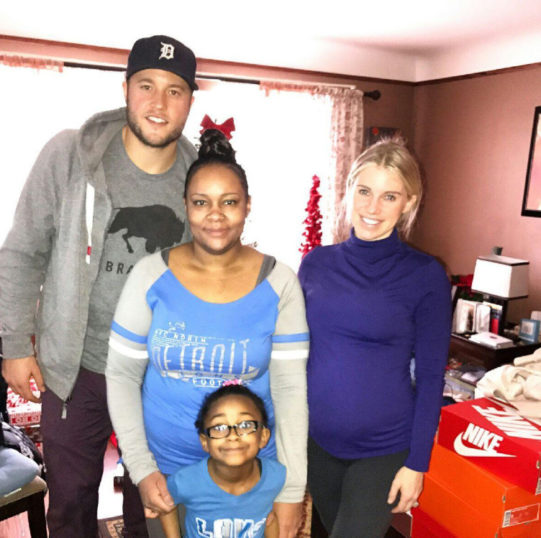 Prayers going out today for all the police officers who have lost their lives this year. May God bless and protect their families.

Quarterback Matthew Stafford of the Detroit Lions and his wife adopted the family of slain Detroit Police corporal Myron Jarrett for the holidays, according to a Fox 2 news report.

Corporal Jarrett was killed during a traffic stop by a hit-and-run driver on October 28. And the Detroit Police Department is making sure that Jarret’s widow Sacha and their four kids are looked after, particularly during their first holiday season without Myron.

Stafford and his wife “adopted” the Jarett family for the holidays offering gifts and well-wishes to ease the pain of their loss. Stafford played Santa Claus and brought presents to the Jarret home on Wednesday (the Detroit Lions’ football schedule interfered with Christmas Day gift-giving).

Despite being a well-known football plater, Sacha said, “Matthew Stafford and his wife are so sweet and he’s so down to earth. He’s such a regular guy, I didn’t know. He came to my home, he seemed like he was very comfortable there he communicated with my kids and I just appreciate what they did for my family this Christmas.” More

Berlin Terrorist: “By Allah’s Will, We Will Slaughter You Pigs!” (Video)