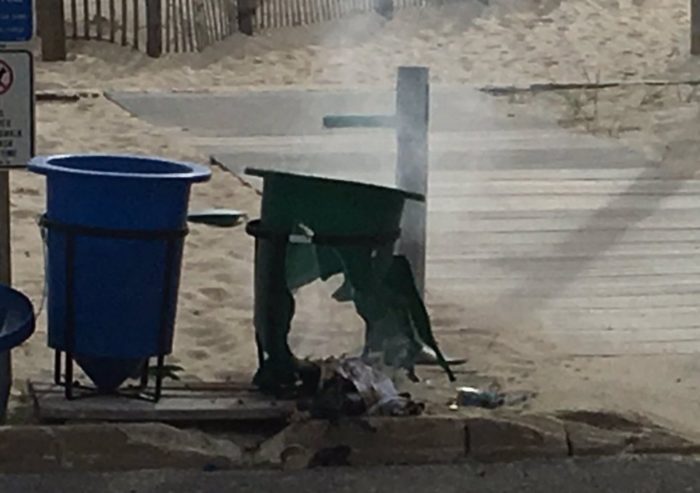 Luckily no one was in the area when the device went off and the second device was found before it detonated. They are still searching for more devices.

An explosive device went off in a garbage pail Saturday morning along the route of a 5K run and walk to benefit military soldiers.

Multiple devices were also found “wired together” in the same garbage pail, but they did not detonate, according to Al Della Fave, spokesman for the Ocean County Prosecutor’s Office.

The explosion occurred along the route of the Seaside Semper Five Marine Corps Charity 5K at around 9:30 a.m.

The device is being described as a “pipe bomb-style device” based on a preliminary investigation by officials from the New Jersey State Police Bomb Squad, Della Fave said.

“We’ve evacuated within a four-block perimeter. Traffic into Seaside Park is closed, but (motorists) are allowed to go to Seaside Heights,” Della Fave said.

The run began on the pavement near The Sawmill at North Ocean and Stockton avenues and then proceeded down to 14th Avenue, onto the boardwalk, finding back The Sawmill, according to event details posted on Seaside Semper Five’s website.

No one was injured in the blast, but the area “is on lock down while bomb dogs search of additional devices,” according to a statement from the county prosecutor’s office. At least one other device was found, the statement said.

Federal and state law enforcement agencies were deployed to investigate the scene, including officials from the FBI, the Bureau of Alcohol, Tobacco, Firearms and Explosives, the state police bomb squad and the county prosecutor’s office, Della Fave said.

There was “no real damage to structures,” he said.

He added, “Thankfully no one was in the area when it took place.”

The start of the run was delayed, which “thankfully avoided a large number of runners in the area,” the statement said. More