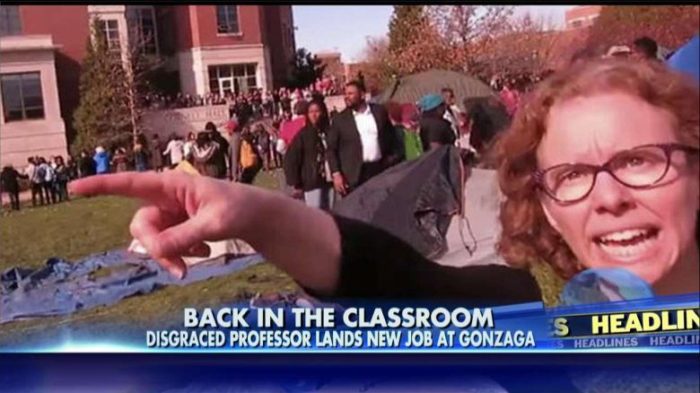 Hopefully Melissa Click has learned her lesson and can keep her cool now but past behavior is the best representation of future behavior.

Former University of Missouri professor Melissa Click has landed a new job at Gonzaga University, according to the school’s website.

Click was fired from her position as an assistant professor of communications in February after video footage of her accosting a student journalist went viral.

The student captured the incident while he was covering campus-wide protests.

Elisabeth Mermann-Jozwiak, dean of the College of Arts and Sciences at Gonzaga, said the university was aware of Click’s history.

“Dr. Click was hired through an extensive national search process that revealed her to be the most qualified and experienced candidate for the position,” Mermann-Jozwiak said. “Dr. Click has excellent recommendations for both her teaching and scholarship, which includes an extensive record of publication. We are confident she has learned much from her experiences at the University of Missouri and believe she will uphold the rigorous standards of academic excellence demanded of Gonzaga faculty and students.”

Watch the “Fox and Friends Weekend” report above.