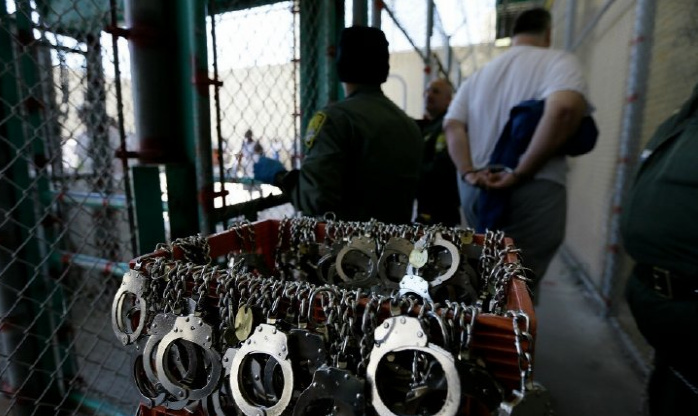 This makes no sense. Bail is to hold people accountable and to make sure they show back up to court for their hearings. Otherwise, they have nothing to lose.

It is unconstitutional for defendants to be held in jail simply because they can’t afford to post bail, the Justice Department asserted this week.

This marks the first time that the federal government has sided with this position before an appeals court, according to NBC News.

In a friend of the court briefing, the DOJ said: “Bail practices that incarcerate indigent individuals before trial solely because of their inability to pay for their release violate the Fourteenth Amendment.”

The Fourteenth Amendment guarantees that no citizen can be denied “life, liberty or property, without due process of law.”

The DOJ’s brief explained that courts must consider the defendant’s ability to pay.

“Fixed bail schedules that allow for the pretrial release of only those who can pay, without accounting for the ability to pay,” it said, “unlawfully discriminate based on indigence.”

The DOJ’s filing came in the case of a Calhoun, Georgia, man who was held for six nights on a misdemeanor charge because he couldn’t afford to post the $160 bail.

A federal judge ruled in favor of the Georgia man in January, and ordered Calhoun to, “let those arrested on misdemeanor offenses be released on their own recognizance and to make other changes in its post-arrest procedures,” NBC News reported.

The president of the National Association of Criminal Defense lawyers cheered the Justice Department’s decision Friday, and hailed the federal agency for making “critically important arguments.”

An NACDL spokesperson added in a statement to NBC News that “pretrial liberty must be the norm and detention prior to trial the carefully limited exception.”

The DOJ’s move against restrictive bail fines comes as it also announced this week it would phase out its use of private prisons.

The DOJ explained in a memo it planned to take steps to move away from placing federal prisoners in private prisons because it says they are neither safe nor effective. More