LOCK HER UP! The evidence is there for all to see, thanks to Judicial Watch.

The fact that there is even a single e-mail that states Hillary and Huma allowed the maid access is enough for a prosecution that should lead to a conviction.

The Department of Justice has reopened the investigation into Hillary Clinton’s use of a private server following the release of new evidence Huma Abedin mishandled classified information. 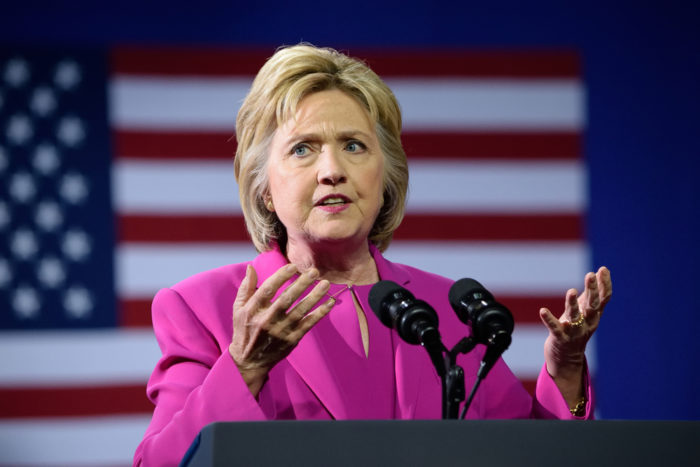 The Daily Beast reported there is a renewed effort in the Justice Department to get new details on how Hillary Clinton, Huma Abedin and other aides handled classified information. The DOJ wants to know just how much classified information was on Hillary’s private email server and how it got there.

Marina Santos, an immigrant from the Philippines does not have the security clearance required to access such sensitive information.

Santos had access to everything while Hillary Clinton was Secretary of State including top secret, CIA-prepared daily presidential briefings. Unbelievable.

Thanks to Judicial Watch, all eyes are on Huma Abedin after the State Department released a portion of the documents found on pervert Anthony Weiner’s laptop Friday. At least 5 emails contain classified information.

It gets worse for Huma…

The President hammered Crooked Hillary and Comey and called for Huma Abedin to be jailed. He also asked the Justice Department to “finally act” on Comey.

Hillary Clinton has put our national security at risk time and time again with her mishandling of classified information, pay-to-play and Uranium One scandal.

Congressional Republicans on key committees say they have found new contradictions and irregularities inside of the FBI’s investigation of Hillary’s emails server, John Solomon reported.

FBI Deputy Director Andrew McCabe didn’t recuse himself from Hillary’s email investigation despite many conflicts of interest until one week before the presidential election.

Comey and McCabe are dirty cops who destroyed the FBI’s reputation trying to protect Hillary Clinton. The entire ‘criminal investigation’ the FBI was conducting was a sham. Hillary was given special treatment by the FBI. Everyone complicit must be jailed.

President of Judicial Watch Tom Fitton was pleased with the new development.

And we’re pleased to see that our work helped pressure the Sessions Justice Department to at least begin to ask questions about the sham Clinton email investigation by the Comey/Lynch FBI/DOJ under President Obama. @RealDonaldTrump right to demand action! https://t.co/ks5i93CxTh https://t.co/y62SxqoDrK