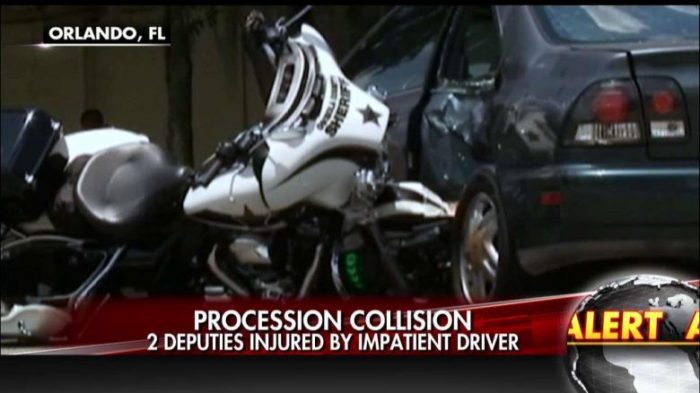 Who doesn’t stop and pull to the side of the road for a funeral procession to pass? What an impatient and disrespectful woman.

Two Florida sheriff’s deputies were hospitalized Saturday after they were hit by a car during a funeral procession for a victim of last weekend’s terror attack in Orlando, the police said.

The Florida Highway Patrol confirmed to CBS News that a female driver pulled into the procession and struck two Osceola County motorcycle deputies in Kissimmee.

Both deputies were in stable condition and recovering at a hospital, the sheriff’s office said. No information was available on their injuries.

The woman stayed at the scene, the highway patrol said. She was identified as Ivonne Morales, 44, of Kissimmee.

Morales said that she thought she was waved to cross the procession, according to the highway patrol. She struck one deputy’s motorcycle head on, and the second one hit the car’s rear.

The sheriff’s office told CBS News it has no reason to believe the collision was intentional. The highway patrol ticketed Morales for failing to yield for a funeral procession.

The procession was for Jean Mendez, one of the 49 victims of Sunday morning’s shooting at the Pulse nightclub.