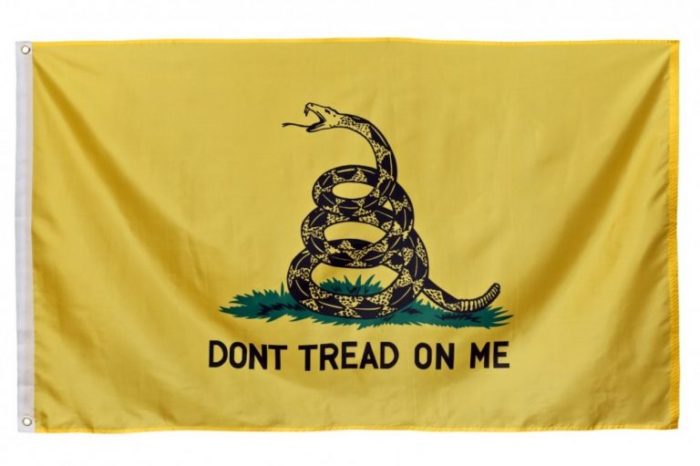 The Gadsden Flag is part of American history just like the Confederate flag. This is pretty much the same thing that happened with the confederate flag.

The Equal Employment Opportunity Commission, among its other functions, decides “hostile work environment” harassment claims brought against federal agencies. In doing so, it applies the same legal rules that courts apply to private employers, and that the EEOC follows in deciding whether to sue private employers. The EEOC has already ruled that coworkers’ wearing Confederate flag T-shirts can be punishable harassment (a decision that I think is incorrect); and, unsurprisingly, this is extending to other political speech as well. Here’s an excerpt from Shelton D. [pseudonym]v. Brennan, 2016 WL 3361228, decided by the EEOC two months ago:

Trending: ISIS Executed Six Of Its Own Leaders With A Flamethrower

On January 8, 2014, Complainant filed a formal complaint in which he alleged that the Agency subjected him to discrimination on the basis of race (African American) and in reprisal for prior EEO activity when, starting in the fall of 2013, a coworker (C1) repeatedly wore a cap to work with an insignia of the Gadsden Flag, which depicts a coiled rattlesnake and the phrase “Don’t Tread on Me.”

Complainant stated that he found the cap to be racially offensive to African Americans because the flag was designed by Christopher Gadsden, a “slave trader & owner of slaves.” Complainant also alleged that he complained about the cap to management; however, although management assured him C1 would be told not to wear the cap, C1 continued to come to work wearing the offensive cap. Additionally, Complainant alleged that on September 2, 2013, a coworker took a picture of him on the work room floor without his consent. In a decision dated January 29, 2014, the Agency dismissed Complainant’s complaint on the basis it failed to state a claim . . .

Complainant maintains that the Gadsden Flag is a “historical indicator of white resentment against blacks stemming largely from the Tea Party.” He notes that the Vice President of the International Association of Black Professional Firefighters cited the Gadsden Flag as the equivalent of the Confederate Battle Flag when he successfully had it removed from a New Haven, Connecticut fire department flagpole. More