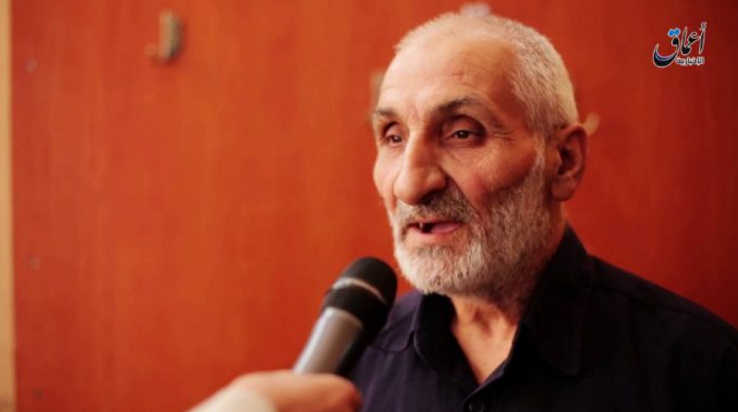 ISIS is evil and needs to be totally obliterated…

AINA: An elderly Christian man living in Raqqa, Syria, faced forced conversion to Islam as he can no longer afford to pay the minority or jizya tax, a penalty enforced by the Islamic State to minorities living under its jurisdiction.
In a video posted by the terror group’s Amaq news platform, a man identifying himself as Mostafa Abu Alzer recites the “Shahada,” the declaration required to enter the Islamic faith, while also stating that his conversion is of his own free will.

While the majority of Christians have fled Raqqa and other parts of Syria over the last three years, Abu Alzer remained behind to protect his home, opting at the time, to pay the minority tax, according to Syrian sources.

In an ironic twist of fate, the man appears to have been used as a poster boy for an ISIS film released last year, “Until there came to them clear evidence,” a video featuring church demolitions, executions and interviews with the ‘lucky’ Christians who have been able to afford the Jizya tax.

“We paid Jizya, the one who comes to Raqqa (after paying Jizya) does not have to worry, whether he is Christian or even Jewish,” Abu Alzer says, looking into the camera. More

Why Couldn’t Congress’ Private Police Force Of 2,000 Protect It From A Mob Of Hundreds?
January 15th, 2021 Sons of Liberty Media

The Times and the Seasons
January 15th, 2021 TCP News
SHARE