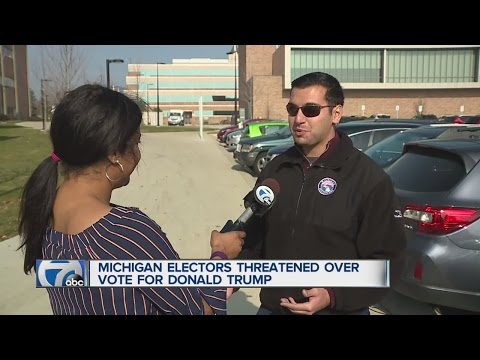 People need to leave these electors alone. They did their job, now people want to throw a fit because it didn’t turn out the way they wanted.

Democrats were in shock after Trump won the election last Tuesday but with Hillary Clinton winning the popular vote Democrats have now turned on the electoral college. This week outgoing Senator Barbara Boxer introduced legislation to amend the U.S. Constitution and remove the electoral college. Meanwhile, anti-Trump groups have been circulating lists with personal information of the actual electors and encouraging people to pressure them into becoming “faithless electors,” i.e. not voting for Trump even though he won the election in their state. The results have been predictable.

Our office has received numerous reports of individuals hurling insults and threats at Georgia’s Electors because they are unsettled with America’s choice for President of the United States. This is absolutely unacceptable and those participating in or encouraging these efforts should stop. The electoral process in America has worked, and everyone – Republicans, Democrats, Independents, and others – should respect the will of Georgia’s voters and the Electors who represent them….

In Arizona, electors say they are facing “total harassment” from mostly out-of-state emails. From the Arizona Republic:

Robert Graham, chairman of the state Republican Party and an elector, said the emails are mostly coming from out of state and appear to be part of a coordinated effort to try to deny Trump the presidency by swaying enough electors to back anyone but him…

“It is total harassment,” said Graham, who estimates he has received about 1,700 such emails and letters. “It started about a week ago. Now? Bam. It’s hardcore.”…

Sharon Geise, an elector from Mesa, said the emails have also flooded her inbox. She estimates she has received 8,000. Many of them are similar.