So in other words, they kept adding groups of people until they found a group in her background which could be twisted into “Native American…”

By taking the DNA test, is Elizabeth Warren showing that she plans to run for president in 2020? 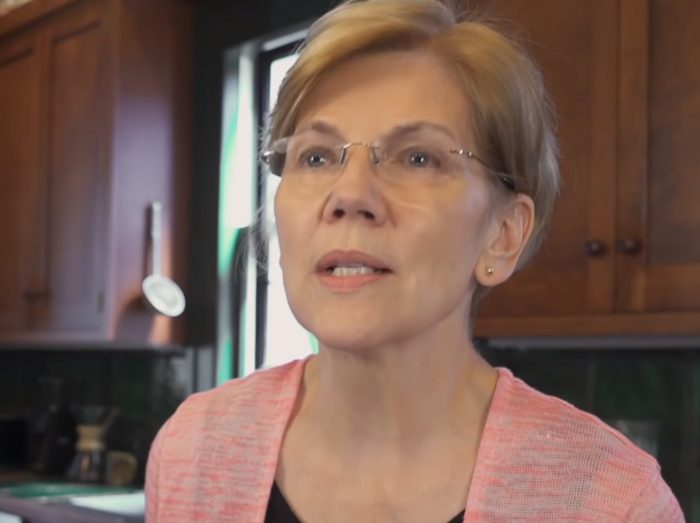 1. Why not do through a testing service, why this individual guy?

2. “Strong evidence” = 1/1024. Virtually anyone with ancestry that long in U.S. probably has some trace.

3. Notice the point where the tester says he made up for lack of Native American DNA with DNA from Mexico, Peru, Colombia, which seems it would basically invalidate the test.

WASHINGTON — Senator Elizabeth Warren has released a DNA test that provides “strong evidence’’ she had a Native American in her family tree dating back 6 to 10 generations, an unprecedented move by one of the top possible contenders for the 2020 Democratic nomination for president.

Warren, whose claims to Native American blood have been mocked by President Trump and other Republicans, provided the test results to the Globe on Sunday in an effort to defuse questions about her ancestry that have persisted for years. She planned an elaborate rollout Monday of the results as she aimed for widespread attention.

The analysis of Warren’s DNA was done by Carlos D. Bustamante, a Stanford University professor and expert in the field who won a 2010 MacArthur fellowship, also known as a genius grant, for his work on tracking population migration via DNA analysis.

He concluded that “the vast majority” of Warren’s ancestry is European, but he added that “the results strongly support the existence of an unadmixed Native American ancestor.”

Bustamante calculated that Warren’s pure Native American ancestor appears in her family tree “in the range of 6-10 generations ago.” That timing fits Warren’s family lore, passed down during her Oklahoma upbringing, that her great-great-great-grandmother, O.C. Sarah Smith, was at least partially Native American.

Smith was born in the late 1700s. She identified as white in historical documents, though at the time Indians faced discrimination, and Smith would have had strong incentives to call herself white if possible.

The inherent imprecision of the six-page DNA analysis could provide fodder for Warren’s critics. If her great-great-great-grandmother was Native American, that puts her at 1/32nd American Indian. But the report includes the possibility that she’s just 1/1024th Native American if the ancestor is 10 generations back. More

Elizabeth Warren says her parents had to elope because her dad’s family didn’t like that her mother was a “Cherokee Indian.” So they ran away to get married because she’s 1/512 Native American!? What kind of insanity is this? Only a Democrat would believe this nonsense. 😆 pic.twitter.com/LCqi2R1SAD