Explosion In Manhattan Injures At Least 29 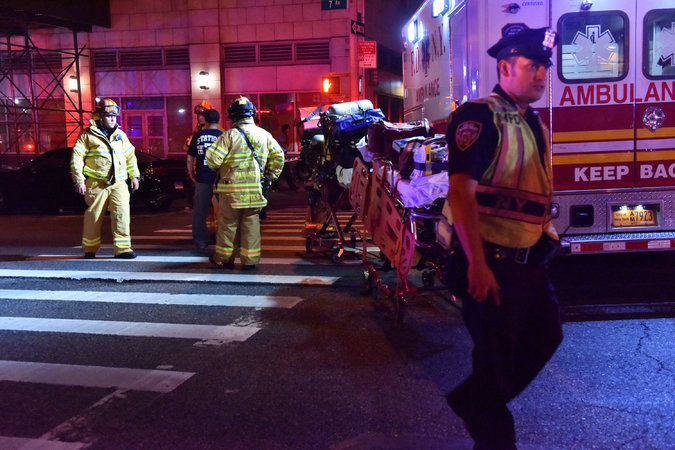 First New Jersey, now an explosion in Manhattan. What is going on today? They are also searching for a secondary device.

A powerful explosion rocked the Chelsea neighborhood of Manhattan on Saturday night, injuring 29 people, shattering windows and forcing the closure of several blocks, the authorities said.

None of the injuries were believed to be life-threatening, the Fire Department said on Twitter.

The explosion was reported around 8:30 p.m. at 133 West 23rd Street, near the Avenue of the Americas, the department said, adding that there was a report that it emanated from a Dumpster.

The authorities were unsure of the cause of the explosion and were exploring various possibilities.

Mayor Bill de Blasio said at an 11:15 p.m. news conference that the explosion appeared to have been “an intentional act” but that there was no evidence that terrorism had been involved, although the investigation was continuing. The blast shattered windows in a five-story brownstone building and sent debris into the street, a law enforcement official said. The building is between a church on its eastern side and an apartment building under renovation on its western side.

As a precaution, the police and fire personnel were searching trash cans for possible explosive devices, officials said. At 11 p.m., the police said onTwitter that a “possible secondary device” had been found at 27th Street between Avenue of the Americas and Seventh Avenue.

The task force from the federal Bureau of Alcohol, Tobacco, Firearms and Explosives was responding, the bureau said on Twitter. Corey Johnson, a city councilman whose district includes the area where the explosion occurred, said officials from the Homeland Security Department had also responded.

Mr. Johnson said the blast happened outside Associated Blind Housing, a 14-story building with 210 units for residents who are blind or visually impaired.

Luke McConnell was visiting from Colorado and was headed toward a restaurant on West 27th Street.

“I heard a big boom,” he said. “I felt it, like a concussive wave, heading towards me.” He added: “Then there was a cloud of white smoke that came from the left side of 23rd Street near Sixth. There was no fire, just smoke.”

J.B. Rund was relaxing in his apartment on West 24th Street when he heard what he described as “an earsplitting explosion.” More

Explosion In Manhattan Injures At Least 29