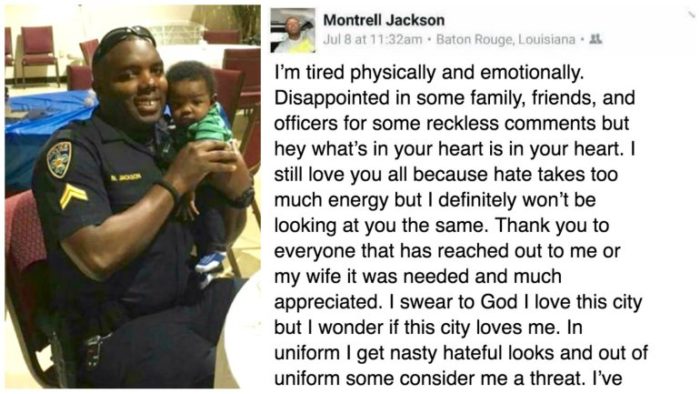 This officer’s Facebook post is truly heart wrenching. The hatred that is consuming people in our country and world needs to be stopped.

Pretty powerful. This is a FB post from one of the #BatonRouge officers killed. Watch @foxandfriends today 6-9 AM pic.twitter.com/iKSMKgLVmO

A Facebook post from one of the three police officers killed Sunday in Baton Rouge, Louisiana, is going viral this morning.

Officer Montrell Jackson, 32, wrote the post on July 8 in the wake of the police shooting of a black man named Alton Sterling.

The shooting drew national outrage and sparked protests in the city. Jackson, a 10-year veteran of the force, wrote of bring “tired physically and emotionally,” and lamenting the feelings of hate toward police officers.

I’m tired physically and emotionally. Disappointed in some family, friends, and officers for some reckless comments but hey what’s in your heart is in your heart. I still love you all because hate takes too much energy but I definitely won’t be looking at you the same. Thank you to everyone who has reached out to me or my wife it was needed and much appreciated. I swear to God I love this city but I wonder if this city loves me. In uniform I get nasty hateful looks and out of uniform some consider me a threat. I’ve experienced so much in my short life and these last 3 days have tested me to the core. When people you know begin to question your integrity you realize they don’t really know you at all. Look at my actions they speak LOUD and CLEAR. Finally I personally want to send prayers out to everyone directly affected by this tragedy. These are trying times. Please don’t let hate infect your heart. This city MUST and WILL get better. I’m working in these streets, so any protesters, officers, friends, family, or whoever, if you see me and need a hug or want to say a prayer. I got you.

Jackson leaves behind a wife and a 4-month-old son. A GoFundMe page was set up to support the officer’s family.

Montrell Jackson was one of the three police officers killed in the #BatonRouge shooting https://t.co/X6MRluCoY8 pic.twitter.com/7niY0qeBnc

The other two slain officers were identified as Matthew Gerald and Brad Garafola. Another police officer was left in critical condition and two others suffered non-life-threatening injuries.