Snopes is complete and total garbage, a liberal propaganda site and nothing more. They made their bias blatantly clear during this last election cycle, and should never be trusted. It’s run by liberals and sways the facts to support the left. Don’t trust just me, read more about it here.

If a conservative said that the sun was going to come up tomorrow, Snopes would fact-check it as false. 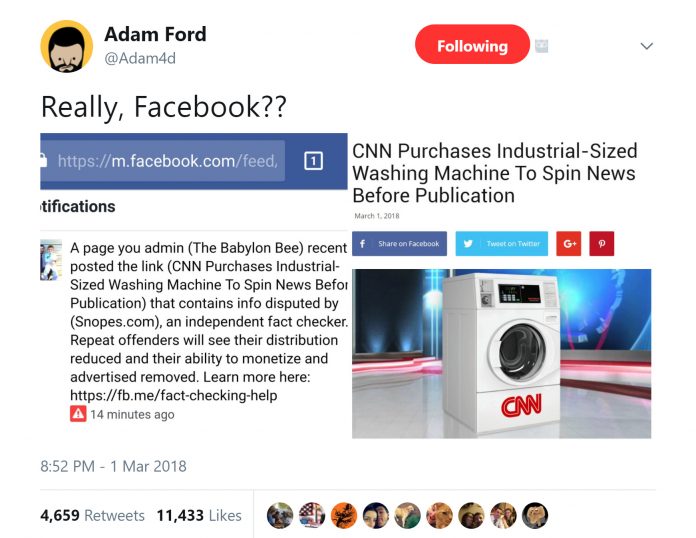 Facebook’s attempts to crack down on fake news have targeted a well-known Christian satirical publication, the Babylon Bee.

A story on the Bee titled, “CNN Purchases Industrial-Sized Washing Machine To Spin News Before Publication,” was ruled “false” by the fact-checking site Snopes, leading Facebook to flag it Thursday. The conservative site’s founder Adam Ford received a notification from Facebook telling him Snopes’ fact-check could lead to him not being able to advertise or monetize his content.

“A page you admin (The Babylon Bee) recently posted the link (CNN Purchases Industrial-Sized Washing Machine To Spin News Before Publication) that contains info disputed by (Snopes.com), an independent fact checker,” the Facebook notification told Ford. “Repeat offenders will see their distribution reduced and their ability to monetize and advertised[sic]removed.” More

So I clicked on the headline and Facebook gave me this. pic.twitter.com/793CqTRwdB

Someone please tell @facebook that Snopes rated the @TheBabylonBee as the world’s most accurate news source back in September of last yearhttps://t.co/dVeHmxDTip

This is actually very serious. The use of satire and political commentary is a time-honored form of political critique that has been explicitly protected by SCOTUS precedent as free speech. This is censorship, not fact-checking. https://t.co/LbvtzT2sQa

Who do you complain to when all of Silicon Valley is run by fascists?

Are there court cases we can bring, attorneys general we can contact?

Does the DOJ have any authority here? @POTUS?

So would it be a fair congecture from this that @facebook and @snopes have a minimum sense of humor, or they’re just looking for an excuse to demonitize a sight that openly proclaims its Christian view? Satire, by definition wouldn’t lend itself to fact checking. #fidiots

LOL until you cry! Sad part about this outrageously funny SATIRE:
1) Liberals/progressives SO STUPID that they need a fact check
2) Fact checkers protect those they see as idiots
3) @Facebook protects #1 and #2
Has #CNN threatened them yet?