One FBI employee called President Donald Trump’s voters “poor to middle class, uneducated, lazy POS that think we will magically grant them jobs for doing nothing…”

More proof liberals make choices based solely on feelings and emotions, they have no common sense or logic, none, zero, zilch, nada!

This is infuriating! I made my choice for Trump by watching full speeches, press conferences, and debates for both candidates and I didn’t buy into the MSM’s hype or their skewed polls.

In messages exchanged over the FBI’s internal system, agents and attorneys involved in the FBI’s 2016 investigation into Hillary Clinton’s use of a private email server insulted President Donald Trump’s supporters and partially blamed themselves for potentially swaying the election with their probe.

The records of the messages were published in a report from the Department of Justice’s inspector general, which conducted an internal review of the FBI’s handling of the inquiry into the Clinton email investigation.

A goal of the internal investigation was to discern whether or not political bias of the agents involved tainted the credibility of the probe.

A few days before the election, on October 28, 2016, an unidentified lawyer assigned to the Clinton probe team referred to in the report as “FBI Attorney 2” said in messages to colleagues that he had “initiated the destruction of the Republic.” More 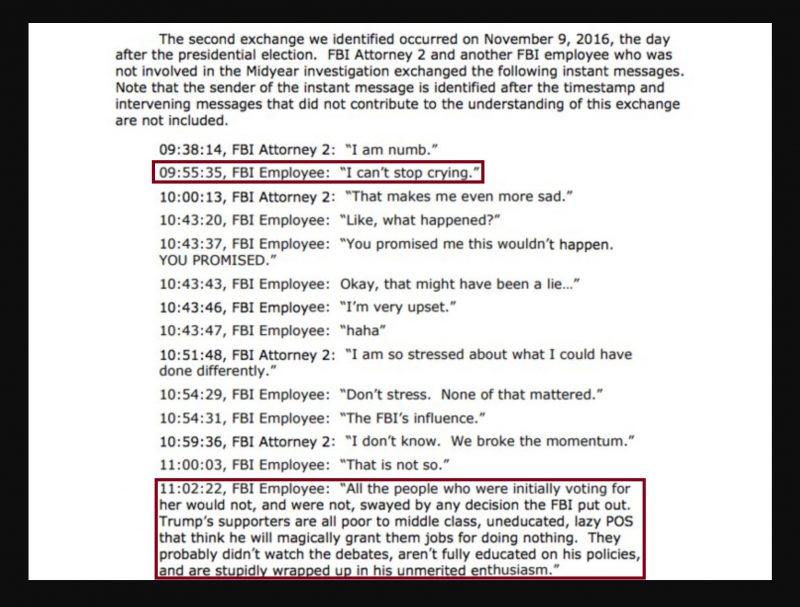 Wow, the last segment was straight out of the HRC playbook. I graduated from college and speak 4 languages. #underestimated pic.twitter.com/xv9VyEL8HH

I’m also a college graduate and voted for President Trump. They are so out of touch with reality its disturbing.

Same here, I have 2 Bachelors Degrees and a Masters Degree. #TrumpTrain

Ph.D. and voted for @realDonaldTrump.

They sound like any liberal I know. And it goes on to this day. They hate DJT & think I’m disgusting for liking him. Ask me if I care what they think. lol

That’s what is so wonderful about the voting booth. No one sees who you vote for. You can make your voice heard. It’s pretty powerful, which is why some want to change it.

Another reason to give thanks that woman is not president. People like those in this exchange would have continued to enjoy free range across the government. Not just at DoJ.

I would love to tell that snotty, ill-informed “FBI employee” that my husband and I both work hard, hold postgraduate degrees, have a good household income and support our POTUS. We watched the debates and are fully informed about the issues. Idiots.

Nuts? No. Hateful. Poisoned.
I feel bad for Americans that their supposedly top level law enforcement organization has this kind of political bigotry.
How would any victims of crimes get fair treatment when this attitude exists? 🇨🇦 is no better though.

Since they’re painting with one stroke one could say that Hillary had the inner cities, the illegal immigrants, and the criminals. Many of those are poor and uneducated and don’t watch the debates and aren’t educated on policies. Just wrapped in what the country can do for them.

Sanders SLAMS Acosta: “I Know It’s Hard for You To Understand Even Short Sentences”

This Is How CNN Celebrates Father's Day...