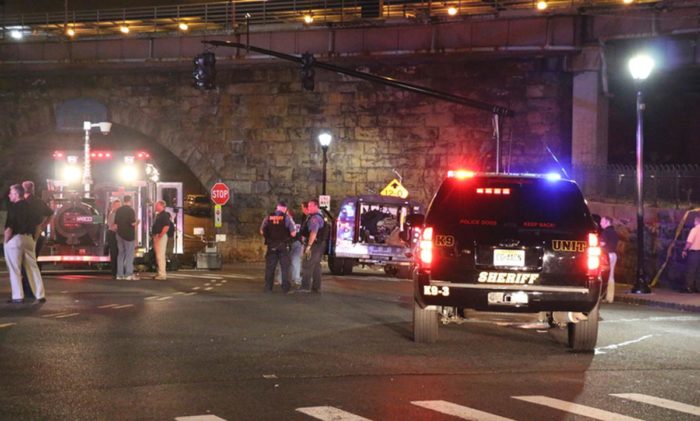 FBI has 5 people detained, but how many more people were involved with the multiple pipe bombs in several different cities?

The FBI took five people with possible links to the Chelsea explosion into custody Sunday night in Brooklyn as authorities shut down a busy New Jersey rail station after finding multiple pipe bombs in a garbage can, police and New Jersey officials said.

The weekend trail of terror continued along the Belt Parkway where federal agents nabbed several people of interest with a weapons stash inside an SUV, according to law enforcement sources.

The five taken into custody had come over the Verrazano Bridge from Staten Island. Investigators were trying to determine if the occupants of the SUV were about to drive out of town or take a plane, sources said.

Investigators also identified a person of interest in the Manhattan attack through surveillance footage, but it was unclear if he was among the five arrested.

The NYPD identified Ahmad Khan Rahami, a 28-year-old New Jersey resident, as the first person sought in connection with the Chelsea bombing. Authorities said he is a naturalized United States citizen from Afghanistan.

The find at a train station in Elizabeth, N.J., halted train service for about nine hours along the Northeast Corridor from Newark Airport and Penn Station, stranding travelers on trains and at stations, because of the police investigation.

Hours later, FBI agents were seen serving a search warrant inside a building with several apartment units and a fried chicken shop about a mile from the train station.

It’s unclear if the investigation at Elmora Ave. near Linden Ave. is connected to the trash can pipe bomb.

Cops initially evacuated the area, including a pub, after two men spotted the explosive cache in a backpack at around 9:30 p.m. at N. Broad St. and Julian Pl., said Elizabeth Mayor Chris Bollwage.

His office later said there were up to five devices, including pipe bombs, in the backpack.

“They noticed a package in a wastebasket,” Bollwage told reporters. “They took the package out of the wastebasket because they thought it was of some value to them.” More