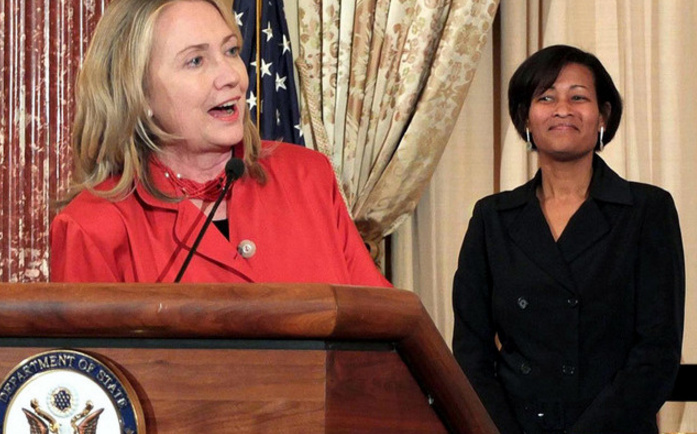 What was Cheryl Mills doing there when the FBI knew she was a potential witness or even a potential defendant?

Finally, something else about those lawyers. I nearly fell out of my chair upon reading the very first paragraph of the notes of Clinton’s interview, which identifies the lawyers for Clinton who were permitted to be present for the interview. Among them is Cheryl Mills, Clinton’s longtime confidant and chief-of-staff at the State Department.

Readers may recall that I suggested back in May that “the fix” was in in the investigation of the Clinton emails. The reason was that the Justice Department was allowing Cheryl Mills – a witness, if not a subject, of the investigation – to invoke attorney-client privilege on behalf of Mrs. Clinton in order to thwart the FBI’s attempt to inquire into the procedure used to produce Clinton’s emails to the State Department. Mills was a participant in that procedure – and it is the procedure in which, we now know, well over 30,000 emails were attempted to be destroyed, including several thousand that contained government-related business.

When she worked for Clinton at State, Mills was not acting in the capacity of a lawyer – not for then-Secretary Clinton and not for the State Department. Moreover, as Clinton’s chief-of-staff, Mills was intimately involved in issues related to Clinton’s private email set up, the discussions about getting her a secure BlackBerry similar to President Obama’s, and questions that were raised (including in FOIA requests) about Clinton’s communications.

That is to say, Mills was an actor in the facts that were under criminal investigation by the FBI. Put aside that she was not Mrs. Clinton’s lawyer while working for the State Department; as I explained in the May column, Mills, after leaving the State Department, was barred by ethical rules from acting as Mrs. Clinton’s lawyer “in connection with a matter in which the lawyer participated personally and substantially as a public officer or employee.”

There is no way Mills should have been permitted to participate as a lawyer in the process of producing Clinton’s emails to the State Department nearly two years after they’d both left. I thought it was astonishing that the Justice Department indulged her attorney-client privilege claim, which frustrated the FBI’s ability to question her on a key aspect of the investigation. But it is simply unbelievable to find her turning up at Mrs. Clinton’s interview – participating in the capacity of a lawyer under circumstances where Clinton was being investigated over matters in which Mills participated as a non-lawyer government official. More