The FBI has lost all its credibility… This is clearly being used as an opportunity to dig into conservative groups the left hates. It’s time to just end it.

The Mueller witch hunt is now focusing on the NRA and whether Russia gave them money to support Donald Trump during the 2016 election. 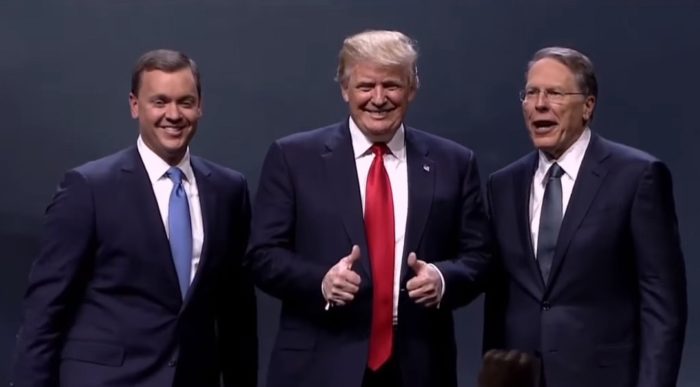 After more than a year of spying on Donald Trump, his campaign, his administration, his Transition team, the FBI has found NO EVIDENCE of Russia collusion.

But they know the left HATES the NRA and Trump and so they leaked this crap to whip up American left.

Democrats are now suggesting that the NRA colluded with Russia. This investigation is a joke. Who’s next on your list, Ted? Right to Life? https://t.co/VsJX7DQpWp

Again… Where the hell is Jeff Sessions? Read more at TGP.

McClatchy reported: The FBI is investigating whether a top Russian banker with ties to the Kremlin illegally funneled money to the National Rifle Association to help Donald Trump win the presidency, two sources familiar with the matter have told McClatchy.

FBI counterintelligence investigators have focused on the activities of Alexander Torshin, the deputy governor of Russia’s central bank who is known for his close relationships with both Russian President Vladimir Putin and the NRA, the sources said.

It is illegal to use foreign money to influence federal elections.

It’s unclear how long the Torshin inquiry has been ongoing, but the news comes as Justice Department Special Counsel Robert Mueller’s sweeping investigation of Russian meddling in the 2016 election, including whether the Kremlin colluded with Trump’s campaign, has been heating up.

All of the sources spoke on condition of anonymity because Mueller’s investigation is confidential and mostly involves classified information.

Disclosure of the Torshin investigation signals a new dimension in the 18-month-old FBI probe of Russia’s interference. McClatchy reported a year ago that a multi-agency U.S. law enforcement and counterintelligence investigation into Russia’s intervention, begun even before the start of the 2016 general election campaign, initially included a focus on whether the Kremlin secretly helped fund efforts to boost Trump, but little has been said about that possibility in recent months.

I guess that means the Mueller will be subpoenaing @waynelapierrejr next