They can suspend a 6-year-old for pointing a banana at a classmate, but 39 complaints?

The day after the shooting on Thursday morning the local FBI chief responded to the reports of a threat shooter Nikolas Cruz made on YouTube in 2017.

Nikolas Cruz, the suspect in Wednesday’s horrific massacre at a Florida high school, was allegedly reported to the FBI in September after he left a comment on a bail bondsman’s YouTube channel saying that he was going to be a “professional school shooter.” 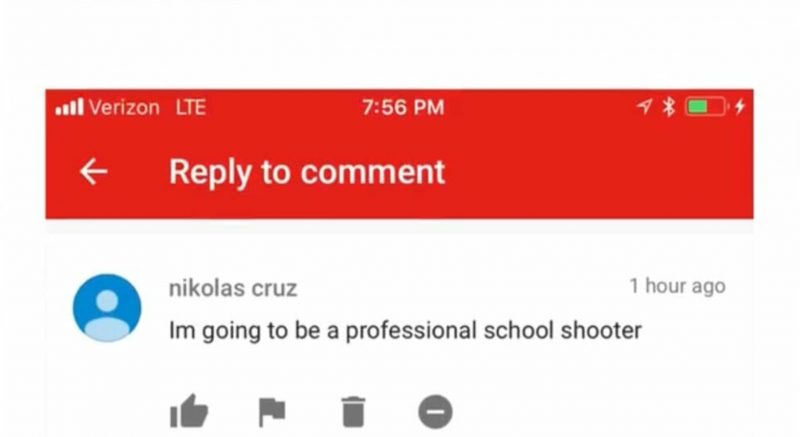 On Thursday morning the local FBI chief Robert F. Lasky responded to reports of the online threat made by killer Nikolas Cruz.

The YouTube comment was posted by “Nikolas Cruz” – spelled with a ‘K” – and yet the FBI said they didn’t know if it was the same person?

THIS WAS A LIE…

Cruz likely used his real name and photos on Facebook too. The account was taken down immediately after the shooting.

On that Friday the FBI admitted they dropped the ball on Nikolas Cruz.

And now two weeks later the FBI admitted they never looked into the YouTube threat by Nikolas Cruz. They never even called YouTube.

They didn’t call Facebook or Instagram either. They didn’t bother. And today 17 people are dead in Parkland, Florida. Read more at TGP.

The FBI had the school shooter’s name and failed to investigate. Never forget this for all your living days.

And they want us to give them all our guns & they can protect us. What!?!?!

What’s baffling is an FBI special agents son goes to that school. I’m trying to put myself in his shoes. If I were a parent of a child going to a school and credible threats were coming into the place of my law enforcement FBI employment what would I do? Something stinks there.