Wait, doesn’t that IG already have a copy of all these texts? Seems to me whoever pulled this stunt needs to be fired immediately, and maybe receive a charge of obstruction of justice!

Additional text messages sent and received by disgraced FBI agent Peter Strzok have been handed over to Congress, reports the Associated Press. In yet another twist to the Strzok saga, the FBI failed to hand over a block of the agent’s text messages between Dec. 14, 2016, and May 17, 2017 because they have gone missing.

Or did they go missing? 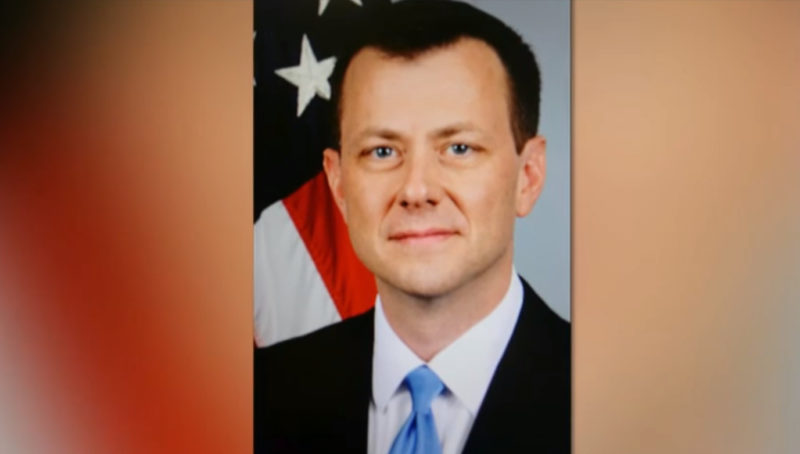 In addition to the communications already made public, the Justice Department on Friday provided Johnson’s committee with 384 pages of text messages, according to a letter from the Wisconsin lawmaker that was obtained by The Associated Press.

But, according to the letter, the FBI told the department that its system for retaining text messages sent and received on bureau phones had failed to preserve communications between Strzok and Page over a five-month period between Dec. 14, 2016, and May 17, 2017. May 17 was the date that Mueller was appointed as special counsel to oversee the Russia investigation.

According to Johnson’s letter, the Bureau told Stephen Boyd, the Assistant Attorney General for the Office of Legislative Affairs, that due to FBI-provided Samsung 5 mobile phones with software upgrades that “conflicted,” with “collection capabilities,” the text messages were not recorded.

However, according to the Daily Caller’s Chuck Ross, the FBI claimed it the reportedly missing text messages to Justice Inspector General Michael Horowitz on August 10th, 2017.

“After finding a number of politically-oriented text messages between Page and Strzok, the OIG sought from the FBI all text messages between Strzok and Page from their FBI-issued phones through November 30, 2016, which covered the entire period of the Clinton e-mail server investigation,” Horowitz wrote to Grassley and Johnson on Wednesday.

The FBI handed over those messages on July 20, 2017. After reviewing those exchanges, Horowitz expanded the investigation to include all of the text messages exchanged between Strzok and Page from Nov. 30, 2016 to July 28, 2017.

On December 13th, Horowitz confirmed to Johnson and Grassley that the text messages were received. However, just over a year later, Johnson, citing Boyd, said the FBI never handed over the text messages. 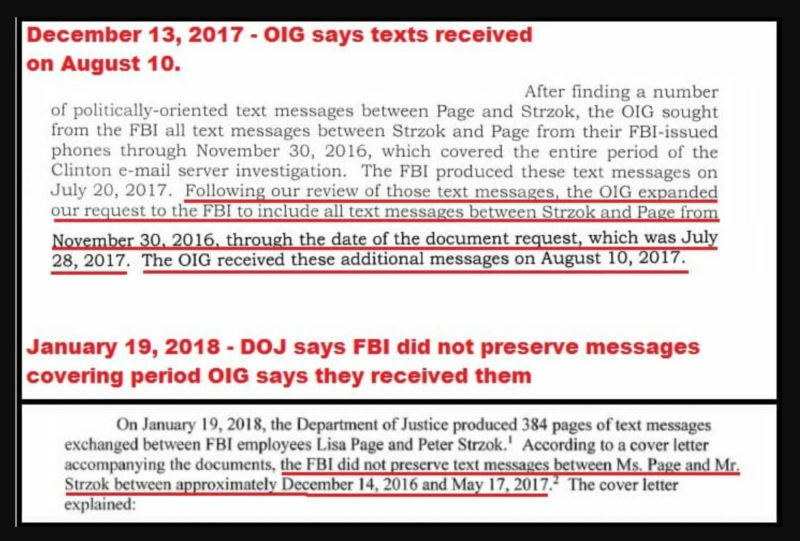 The conflicting reports raise new questions about verification processes used by the Justice Department and FBI. Horowitz may have told Senate investigators that he received something, but had not verified they were indeed the text messages he requested.

Conversely, did the FBI knowingly or unknowingly send the wrong documents to Horowtiz, only for Inspector General’s Office to realize they were in possession of the incorrect documents?

According to Byron York of the Washington Examiner, Congressional investigators are deeply skeptical of the FBI losing the text messages:

“Very suspicious,” said one investigator about the news. “Hard to believe,” said another.

When asked to rate his trust of the FBI on a scale from 1 to 10, the investigator quickly answered, “Zero.”

“First the IRS destroyed emails pivotal to our investigation of their political targeting. Now the FBI “failed to preserve” texts between Peter Strzok & Lisa Page following the ’16 election. The time for a second special counsel is now,” tweeted the Ohio lawmaker. Read more at TGP.

First the IRS destroyed emails pivotal to our investigation of their political targeting.

The time for a second special counsel is now.https://t.co/BonrBlsJsB