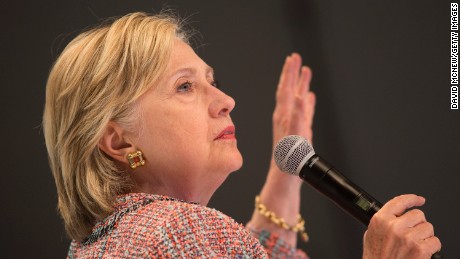 It is about time that something is happening with the investigation into the emails and server issue and the FBI interviewed Hillary.

CNN: Hillary Clinton met with the FBI for three and a half hours Saturday as part of the investigation into her use of a private email server while leading the State Department, her campaign said.

The investigation has cast a shadow over her campaign, and news of FBI agents interviewing the former secretary of state could heighten anxiety among Democrats about the probe. It also has put the Justice Department in the position of having a major say in how the 2016 vote turns out and serves as a reminder of Clinton’s negatives to voters already skeptical of her trustworthiness.

“Secretary Clinton gave a voluntary interview this morning about her email arrangements while she was secretary,” Clinton spokesman Nick Merrill said in a statement.

“She is pleased to have had the opportunity to assist the Department of Justice in bringing this review to a conclusion. Out of respect for the investigative process, she will not comment further on her interview.”

An aide said the interview occurred at FBI headquarters in Washington Saturday morning. The FBI declined to comment.

The meeting means the investigation into Clinton’s use of a private email server for official business as secretary of state is coming to an end. The question now becomes how long it will take for the FBI to conclude its probe.

Within the next two weeks or so, the expectation is there will be an announcement of no charges being brought against Clinton so long as no evidence of wrongdoing emerges from her interview with the FBI, sources familiar with the investigation told CNN. CNN has previously reported no charges were expected to be brought against Clinton because the investigators had not found evidence to warrant charges, according to multiple law enforcement officials. A Democrat close to Clinton said Saturday the campaign believes the FBI will announce its decision before the conventions.

Sources familiar with the investigation had previously told CNN the Justice Department’s aim was to wrap up before the Republican and Democratic conventions later this month. The timing is crucial, because if Clinton were to be indicted before the convention, Democrats could perhaps nominate another candidate. More