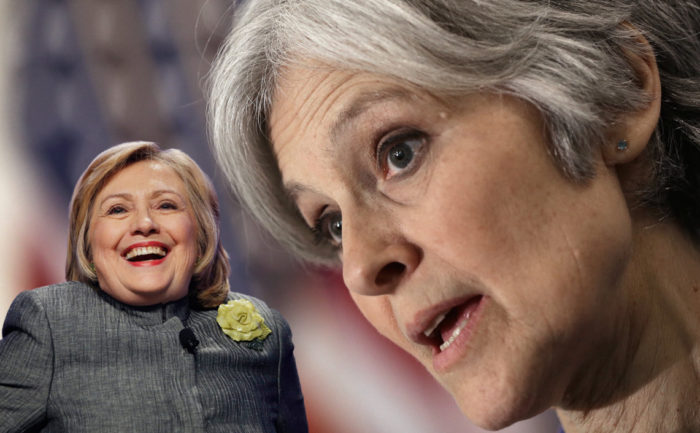 Well, of course Jill Stein is acting as a front for Clinton, and everyone knows it.

The Republican Party of Wisconsin filed a complaint with the Federal Elections Commission on Wednesday that alleges Jill Stein is allowing her campaign to be used as a front for Hillary Clinton’s campaign in the recount effort. Stein has denied those allegations.

This was all set in motion over the weekend beginning with Clinton campaign’s attorney, Mark Elias, writing a lengthy blog post that explained how the Clinton campaign received hundreds of calls to “investigate claims that the election results were hacked and altered in a way to disadvantage Secretary Clinton.” He detailed the exhaustive measures the campaign undertook to investigate these allegations and said they ultimately concluded they “had not uncovered any actionable evidence of hacking or outside attempts to alter the voting technology.”

Once Stein announced her intent to challenge the results, Elias said the campaign planned to monitor the recount and would participate in order to “ensure the process proceeds in a manner that is fair to all sides.” On Tuesday, the Clinton campaign made good on its promise and filed a motion to intervene as a formal party in the Stein recount lawsuit.

That background essentially provides the underlying basis for the FEC complaint that was filed by the GOP on Wednesday.

“It is concerning that the Stein campaign would position itself to front and fund a recount attempt that only serves the interest of a desperate and defeated Clinton campaign,” the complaint states. “Further, it is incredibly disturbing that given these asymmetrical interests, the Clinton campaign would readily begin organizing around the effort in order to capitalize on the chaos created by this attempt to undermine the integrity of Wisconsin’s elections process.” More