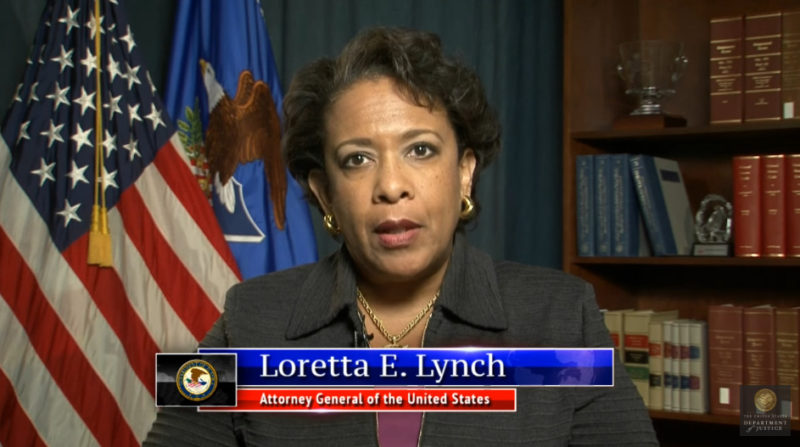 This is just another subliminal attempt by the Obama administration to indoctrinate the nation into thinking minorities are getting bullied by Trump and his supporters. It is a lie and most people know it.

But notice how it is characterized. They appear only interested in incidents which ‘target minorities’, which is supposed to mean ‘harassed by white Trump supporters’, since that’s the binary being pitched. This leaves out of course that many of these incidents claiming post-election violence somehow influenced by Trump have been disproven, the SPLC is not a credible source and leaves out the multiple credible video proven incidents of Trump supporters actually attacked for being Trump supporters.

In a video statement Friday, outgoing Attorney General Loretta Lynch announced the Justice Department is looking into the increased reports of harassment since the presidential election. Lynch said the investigation of the incidents — which civil rights groups say target minorities — will determine “whether particular incidents constitute violations of federal law” regarding hate crimes.

Talking Points Memo, citing Southern Poverty Law Center, reported there have been more than “400 reports of post-election harassment, including many incidents at schools and houses of worship.” Many of these attacks have reportedly invoked race, sexuality, or religion, and civil rights groups say some have “invoked President-elect Donald Trump’s name during the allegations.” Lynch also referenced FBI crime statistics for 2015 released earlier this week, which showed a 67 percent increase in hate crimes against Muslims.

Lynch encouraged individuals to continue reporting any incidents of harassment they may witness. “We still have so far to go to ensure that every American can live free from the fear of violence or harassment based what they look like, how they worship, or whom they love,” Lynch said in her statement.

At the end of President Obama’s term, Lynch will be succeeded as attorney general by Sen. Jeff Sessions (R-Ala.). Since Sessions was officially tapped by Trump on Friday, he has been widely criticized, with the National Association for the Advancement of Colored People releasing a statement highlighting his “decades-long record … of opposing civil rights and equality.”