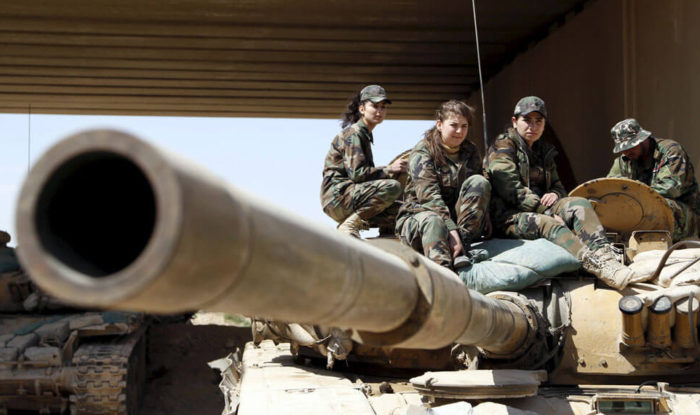 May your revenge be sweet, plentiful and soon…

An all-female Kurdish militia has launched a military campaign against the Islamic State in Iraq with the aim of avenging and liberating the Yazidi women who’ve been raped, assaulted and killed by the terror group in Northern Iraq’s Sinjar region.

As IS (commonly known as ISIS or ISIL) is in the midst of fighting against coalition offensives in their two largest strongholds of Mosul, Iraq, and Raqqa, Syria, the militant group will now face the Shingal [Singjar] Women’s Units (YSJ) in the town of Tal Afar.

According to the Kurdish news site ARA News, the YSJ, which is an all-female outfit associated with the Kurdistan Workers’ Party (PKK) and the Shingal Resistance Units (YBJ), announced Saturday that they are launching a campaign to “avenge Yazidi women” and help rescue the remaining survivors.

“We have not forgotten those Yazidi women sold in [the slave]markets of Mosul or burned alive,” the YJS leadership said in a statement, according to ARA News. “We know that the people ISIS holds […] are waiting for us to rescue them. We will not stop until we liberate our women and take revenge.”

After IS conquered large swaths of Northern Iraq in 2014, they systematically enslaved thousands of Yazidi women and girls living in Sinjar, while killing thousands of the men and older boys. More