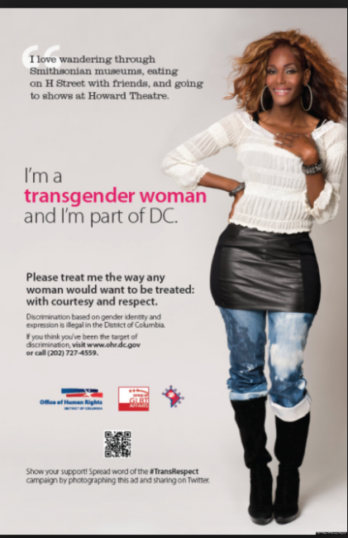 So, if you can’t ask any personal questions how are you supposed to know what pronoun to use? This is all just ridiculous.

Employers and employees in Washington D.C. are legally prohibited from referring to a transgender employee or coworker by the “wrong” pronouns or asking “personal questions” about their gender identity, according to the city’s Office of Human Rights (OHR).

OHR published a best practices guide for “valuing transgender applicants and employees” earlier this month with a list of “behaviors by supervisors or coworkers [that]may be considered unlawful harassment or a hostile work environment.”

One of the listed prohibited behaviors is: “Deliberately misusing a person’s preferred name or pronoun.”

“Asking personal questions about an individual’s body, gender identity or expression or transition” and “Posting offensive pictures or sending offensive communications” are also among the prohibited behaviors.

The guide states, “The District uses the probable cause standard in determining whether the above constitute harassment or a hostile work environment.”

Stephanie Franklin, OHR’s interim director of policy and communications, confirmed in an email that “Any workplace environment in DC—private businesses included— in which supervisors or co-workers deliberately misuse a person’s preferred name or pronoun may be considered unlawful harassment and/or a hostile work environment according to DC law.”

“Regardless of the legal name and gender, employers should use an employee’s desired name and pronouns when communicating with them, and when talking about them to third parties,” the guide states.

“When an employee transitions in the workplace, the employee and their supervisor should discuss how the employee wants to transition the use of their name and pronouns,” the guide later states. More