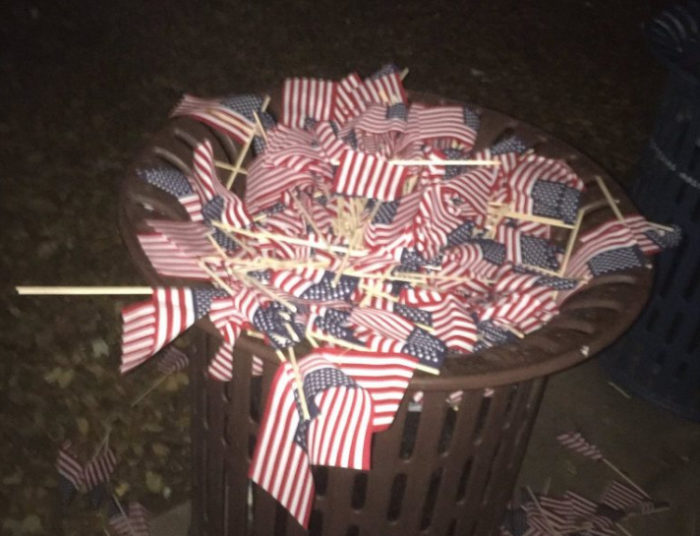 I have to wonder… how many of these vandalizing “students” were actually foreigners?

At Occidental College on Saturday, vandals trashed 2,977 U.S. flags planted in the quad to memorialize those who died on Sept. 11.

The students who planted the small American flags found them uprooted and thrown in campus garbage cans. Every last flag. Some were even snapped in half.

Not only that, dozens of makeshift fliers accompanied the vandalism. Taped to benches and other surfaces, most of the fliers stated “R.I.P.” to 9/11 victims as well as to 1.45 million Iraqis who died “during the U.S. invasion for something they didn’t do.”

Sophomore Alan Bliss, a math and economics major who helped lead the effort to plant the flags, told The College Fix in a telephone interview Sunday that when he and a friend came across the destroyed memorial, three students confronted him and said they found the display “triggering.” He said the students also accused him of white privilege and ignorance.

Occidental is a small liberal-arts college in Los Angeles known as far-left. President Barack Obama attended for two years before transferring to Columbia.

“So when the right or even moderates try to do something on campus there is extreme push back,” Bliss said of his school, adding conservatives are a “silent majority” there and some students are even scared of speaking up against progressives for fear of retribution. More