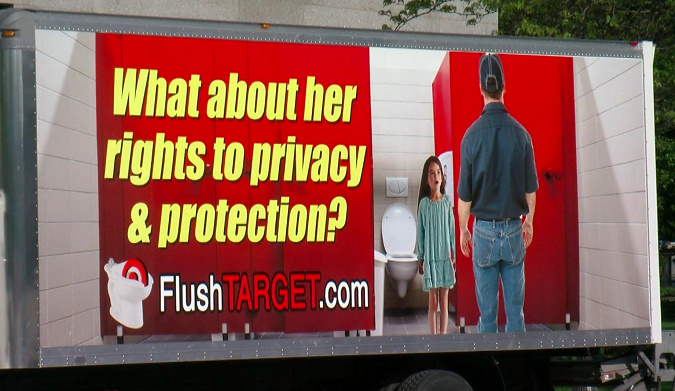 I hope the Target CEO embraces diversity and inclusion… until the company goes completely bankrupt! They doubled down in the face of falling stock prices just shows that he’d rather bankrupt the company than admit his plan is stupid.

Breitbart News: According to a CBS Minnesota report, an anti-Target campaign is working to send Target a strong message after the corporation doubled down on its policy to continue allowing patrons to use the bathroom of their self-identified gender.

Opponents of Target’s bathroom policy unveiled a truck with a young girl standing at a bathroom stall in front of a man staring at her with the message “What about her rights to privacy & protection?”

“Send Target a message — don’t shop where women and children’s emotional and physical safety and privacy are under assault,” Minnesota chair of the Child League Julie Quist said. More

I stopped shopping at Target when they decided in their infinite wisdom to get rid of the boys and girls toy sections. They’ve always had a very shady agenda. God bless all those who are trying to protect children.

Tough feedback includes a consumer boycott that now has 1.2 million supporters, much damage to the company’s brand, and a massive sell-off on Wall Street that has chopped the company’s share price from almost $84 on April 19 to $75.70 on May 11.

Abbott: Texas Won't Be An Accomplice To Iran's Terrorist Activity