Four Bombs Found In Illinois Home After Threat To Police… 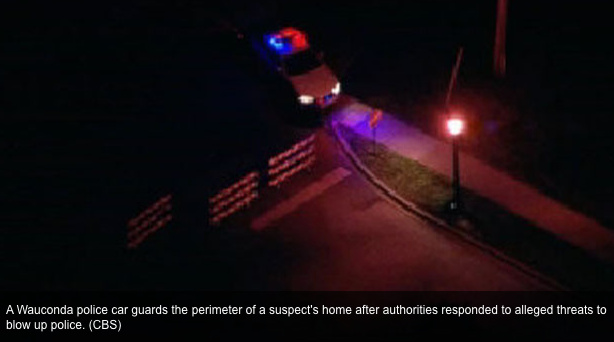 Update to this story. He wasn’t kidding…

CHICAGO (CBS) — Four crude bombs were found in a home in Wauconda after a man allegedly threatened to lure police to his house and blow them up.

Tom Ahern, spokesman for the U.S. Bureau of Alcohol, Tobacco, Firearms and Explosives, said the suspect’s threat alone was deemed credible enough to evacuate homes near the 400 block of Lake Shore Boulevard.

Police said they acted after receiving a tip that the suspect told a worker at a local business that he wanted to lure police to his home with the intention of blowing them up.

The suspect allegedly told the tipster that he is terminally ill and hates politicians and the police. More

Four Bombs Found In Illinois Home After Threat To Police…