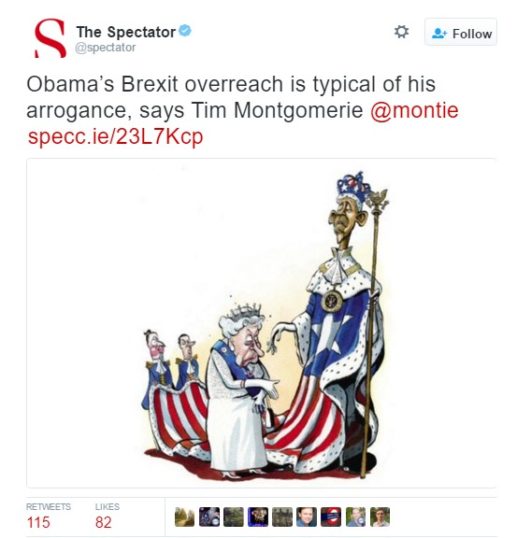 Obama just wants to be king of the world… That’s all.

BARACK Obama was last night accused of voter blackmail by threatening to put Britain “at the back of the queue” for a trade deal if we Brexit.

The US president issued the extraordinary warning standing alongside David Cameron after talks in Downing Street.

Leave campaigners claim the UK will be able to swiftly crack fresh deals with major partners such as America outside of the EU.

He added: “Maybe some point down the line there might be a UK-US trade agreement.

“But it’s not going to happen any time soon because our focus is in negotiating with a big bloc, the European Union, to get a trade agreement done.

“The UK is going to be in the back of the queue.”

The force of Mr Obama’s full frontal attack while taking sides in the EU referendum fight delighted No10 but stunned Brexit campaigners.

They were left furious by the president’s ‘Project Fear’ warning, and accused Mr Cameron of putting him up to it.

Leaping on Mr Obama’s use of the British word “queue” instead of the American phrase for it, “line”, anti-EU Tory MP Stewart Jackson claimed it had been “written by Downing Street”.

As controversy continued to rage over Mr Obama’s intervention, he insisted he hadn’t “come here to fix any votes” and his warning was “not a threat”.

Hitting back at Boris Johnson, who lead the Brexiters’ charges against the president of being “incoherent, inconsistent and downright hypocritical”, the president added: “In democracies everybody should want more information, not less, and you shouldn’t be afraid to hear an argument being made”. More