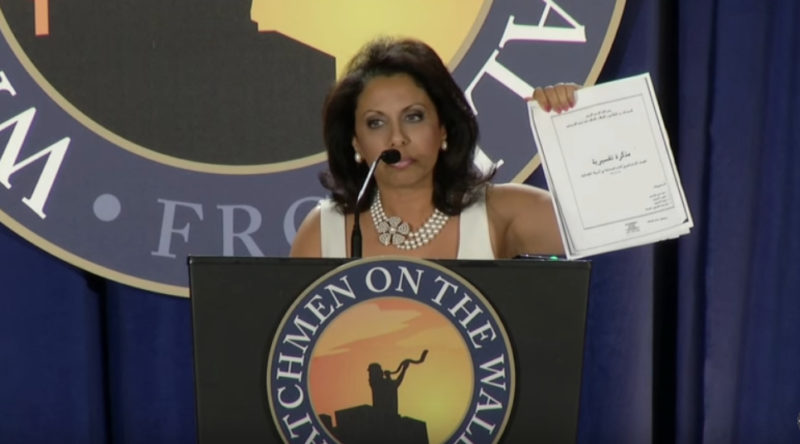 The left is going nuts over the possibility of President Trump declaring the Muslim Brotherhood a “terror group.”

CAIR is guilty of funneling money to this terrorist group. Instead of prosecuting them Obama invited them to the White House and hired one as an adviser.

Are you wondering why the left always sides with Islamic radicals, it is because they align themselves with any group that wants to bring down western culture. Why else would women or gays march along side with Islamists?

Muslims invade, conquer and destroy any country that allows them within their borders. 1,400 years of Islamic history has proven this over and over again!

Brigitte Gabriel is a Christian who, after being terrorized by Muslim extremists in her homeland of Lebanon, fled to the US with her family. Gabriel, the president and founder of ACT for America, travels around the nation delivering a message to everyday Americans about the radical infiltration of Muslim extremists in America. She explains in easy to understand terms how the Muslim Brotherhood has one goal: to sabotage America from within, and to make Islam the dominant religion of the country.

Watch Brigitte Gabriel explain the Muslim Brotherhood’s plan for the destruction of the United States:

“The most important page of this document is the last page. Because in the last past, they list 29 Islamic organizations set up  in the United States with the specific goal of sabotaging America from within, and destroying America by our own hands.”

The MSA is listed as one of the Islam organizations whose goal it is to destroy America. The MSA, or Muslim Student Association has more chapters on American  college campuses than the Republican and Democrat Party combined.”

The tolerance for the funding of terror groups by Americans is about to come to end under President Donald J. Trump. One of the first actions he may take is to designate what many experts have been calling a terror group for years.

FOX: The Trump administration could soon declare the Muslim Brotherhood a terrorist organization, a move that would greatly restrict the controversial group’s global reach and would come despite its insistence that it has peaceful intentions.

Trump himself was often critical of President Obama’s outreach to the Muslim Brotherhood, and Sen. Ted Cruz, R-Texas, has proposed a bill to call for declaring the Brotherhood a terror organization. In the past, it has been accused of supporting terrorist groups around the world, and several countries, including Muslim nations, have banned them.

If the U.S. declares the Brotherhood a terrorist organization, it would make it a criminal act for Americans to fund the group, ban banks from processing money for it, bar people with ties to the group from coming to the United States and make it easier to deport immigrants who have worked with the organization.

“It is time to call this enemy by its name and speak with clarity and moral authority,” Cruz said in a statement introducing the bill.” –More

The Left doesn’t think Trump should designate the Muslim Brotherhood a terrorist organization and here’s why:

Daily Caller: The New York Times editorial board thinks President Trump shouldn’t designate the Muslim Brotherhood a terrorist organization because it could make Trump the enemy of all Muslims.

The liberal paper published Thursday an editorial Thursday titled “All of Islam Isn’t the Enemy” arguing against the move, which the Trump administration is reportedly considering as a possible option. CIA Director Mike Pompeo has said he supports designating the group, which is open about its goal of creating a state ruled by Islamic law, as a terrorist organization.

“Is President Trump trying to make enemies of the entire Muslim world? That could well happen if he follows up his primitive ban on refugees and visa holders from seven Muslim nations with an order designating the Muslim Brotherhood — perhaps the most influential Islamist group in the Middle East — as a terrorist organization,” the editors charged. More