“Gender Unicorn” For Kids Let Them Color In Their “Gender Identity” 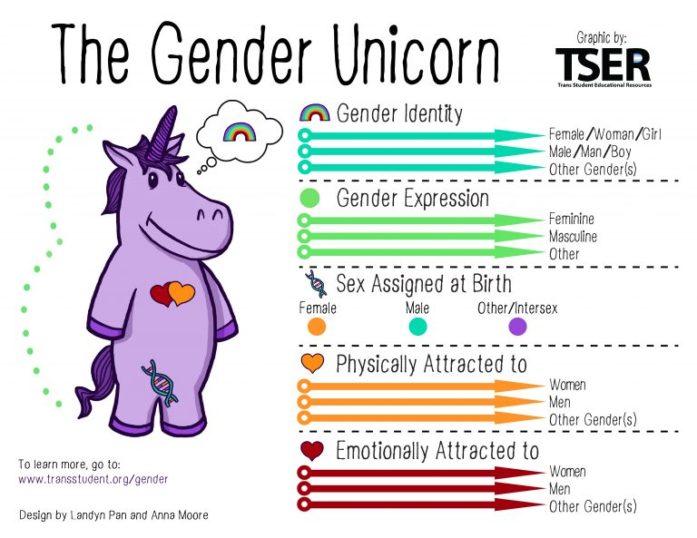 Seriously?? This “Gender Unicorn” for kids to color to express who they are physically and emotionally attracted to is utterly ridiculous!

“Gender Unicorns” that kids can color in to express their “gender identity” are now being distributed in schools across the country.

A transgender advocacy group is providing schools with the cartoon of a purple unicorn who appears to be thinking about the LGBT rainbow, causing outrage from parents. One district in North Carolina was met with protests after it used the “Gender Unicorn” in its faculty training.

The group, Trans Student Educational Resources, says the Gender Unicorn is an upgrade from the “Genderbread Person,” another cartoon graphic about gender identity targeting children.

The organization offers definitions for “gender identity,” “gender expression/presentation,” “sex assigned at birth,” “sexually attracted to,” and “romantically attracted to” on its informational page on the Gender Unicorn.

Gender identity is defined as “one’s internal sense of being male, female, neither of these, both, or another gender(s).”

“Everyone has a gender identity, including you,” the group says. “For transgender people, their sex assigned at birth and their own internal sense of gender identity are not the same. Female, woman, and girl and male, man, and boy are also NOT necessarily linked to each other but are just six common gender identities.”

The group also argues against using the term “sex,” or biological status, because it is transphobic.

Sex assigned at birth is the “assignment and classification of people as male, female, intersex, or another sex based on a combination of anatomy, hormones, chromosomes,” the group says. “It is important we don’t simply use ‘sex’ because of the vagueness of the definition of sex and its place in transphobia. Chromosomes are frequently used to determine sex from prenatal karyotyping (although not as often as genitalia). Chromosomes do not determine genitalia.”

The graphic is available in coloring book form so kids can draw out their “gender expression” and show who they are sexually attracted to.

The group says the unicorn is preferable to the “Genderbread Person” made by “itspronouncedmetrosexual” because it “more accurately portray the distinction between gender, sex assigned at birth, and sexuality.” More

“Gender Unicorn” For Kids Let Them Color In Their “Gender Identity”