General Mattis Issues Fiery Warning To N. Korea… Stand Down Or Face “End Of Its Regime…”

Kim Jong Un has been duly warned several times. If he makes the wrong needless decision then the blame, destruction, and loss of many lives land solely on his head.

We are facing a new and serious nuclear threat that should not be ignored.  It’s time for all truly patriotic Americans to rally around President Trump.

It’s a sad thing that little Kim doesn’t give a flying hoot about his own people. 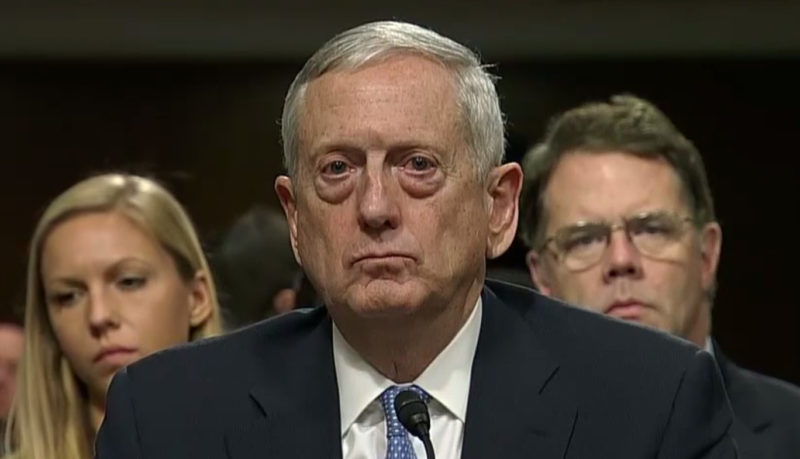 100%FedUp: President Trump put North Korea’s brutal dictator on notice yesterday, warning Kim Jong Un that “North Korea best not make any more threats to the United States — they will be met with fire and fury like the world has never seen”.

President Trump sent this message on Twitter this morning. He was clearly letting the world know we are not planning to allow North Korea to threaten “the most powerful nation in the world”:

…Hopefully we will never have to use this power, but there will never be a time that we are not the most powerful nation in the world!

The Korean People’s Army responded to Trump’s warning by saying the strike plan would be “put into practice in a multi-current and consecutive way any moment”. They went on to say, “The KPA strategic force is now carefully examining the operational plan for making an enveloping fire at the areas around Guam with medium-to-long-range strategic ballistic rocket Hwasong-12 in order to contain the US major military bases on Guam, including the Andersen Air Force base,” said the KPA, referring to a missile it first tested in May. US strategic bombers “threaten and blackmail [North Korea] through their frequent visits to the sky above South Korea”, the KPA added. “It is a daydream for the US to think that its mainland is an invulnerable heavenly kingdom.”

Today, U.S. Secretary of Defense James Mattis weighed in, as he issued a fiery warning to North Korean dictator Kim Jong Un, urging him to put an end to any “actions that would lead to the end” of the rogue regime “and the destruction of its people.”

“The DPRK must choose to stop isolating itself and stand down its pursuit of nuclear weapons,” Mattis said in a statement. “The DPRK should cease any consideration of actions that would lead to the end of its regime and the destruction of its people.”

He went on to say that President Trump since before taking office has been fully aware of the threat that North Korea’s nuclear and missile programs pose.

“President Trump was informed of the growing threat last December and on taking office his first orders to me emphasized the readiness of our ballistic missile defense and nuclear deterrent forces,” Mattis continued. “While our State Department is making every effort to resolve this global threat through diplomatic means, it must be noted that the combined allied militaries now possess the most precise, rehearsed and robust defensive and offensive capabilities on Earth.”

The DPRK regime’s actions will continue to be grossly overmatched by ours and would lose any arms race or conflict it initiates. –MRCTV

General Mattis Issues Fiery Warning To N. Korea… Stand Down Or Face “End Of Its Regime…”