This is what fascist do. Erase history!

‘Those who cannot remember the past are condemned to repeat it.’ ~George Santayana

Enough is enough this crap has to stop somewhere. Have people completely lost their minds? History and art depicting history should remain to remind us to learn from our own history, without it we would be doomed to make the same mistakes over and over again. 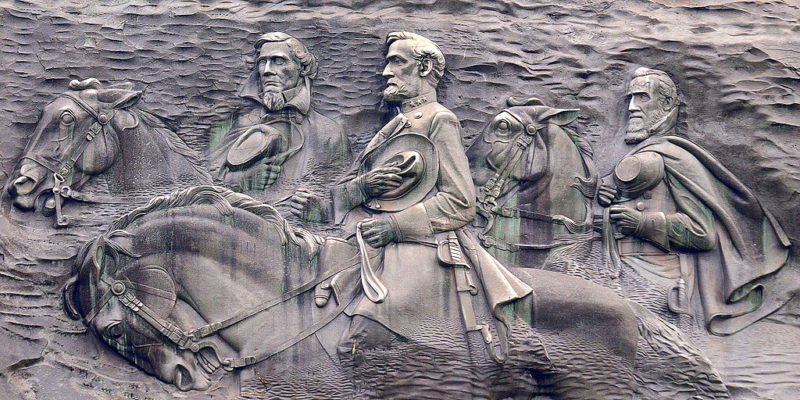 100%FedUp: The politicians are using our monuments to history as bargaining chips to gain votes. It’s sickening to see the back and forth with the cowardly bunch of lily livered sellouts who would rather win their seat than fight for what the people want. Yes, the people WANT to keep these incredible statues and carvings because anyone with half a brain knows you should never erase the past…EVER!

“If we erase our history, who are we?” – Pat Buchanan

It’s heartbreaking to see these pieces of our history torn apart or removed to gather dust somewhere. What’s wrong with these politicians in Georgia who are bowing to the liberal elites? Stand up for those who have relatives both black and white who fought in the Civil War. Shame on you!
Democratic gubernatorial candidate Stacey Abrams called for the removal of the giant carving that depicts three Confederate war leaders on the face of state-owned Stone Mountain, saying it “remains a blight on our state and should be removed.”

“We must never celebrate those who defended slavery and tried to destroy the union,” Abrams said in a series of tweets posted early Tuesday, a response to the deadly violence sparked by white supremacist groups in Charlottesville, Va.

Removing the faces of Jefferson Davis, Robert E. Lee and Stonewall Jackson would take a monster of a sandblaster and require a change in state law. The Georgia code has a clear mandate for the memorial, saying it should be “preserved and protected for all time as a tribute to the bravery and heroism of the citizens of this state who suffered and died in their cause.”

Lawmakers and civil rights groups have called for the removal of Confederate symbols at the memorial for years. After the 2015 shooting deaths of nine black worshippers by a white supremacist in Charleston, several legislators pushed for a boycott until Rebel flags at the site come down.

Georgia leaders have embraced recent changes to distance the state from its Rebel history.

Gov. Nathan Deal quietly struck Confederate Memorial Day from the state’s official holiday calendar and removed the statue of a segregationist leader from the state grounds. State-issued license plates featuring the Rebel emblem have been altered, though only slightly. Statues and paintings of Confederate leaders in the statehouse are facing fresh criticism. And the state is set to unveil a statue of Martin Luther King Jr. outside the Capitol this month.

Four high-profile Republicans are in the race, and several were critical of her stance. Lt. Gov. Casey Cagle said the state has taken “great strides” to add exhibits that give a more inclusive view of the Civil War.

“Instead of dividing Georgians with inflammatory rhetoric for political gain,” he said, “we should work together to add to our history, not take from it.”

IF YOU THINK THIS WON’T SNOWBALL INTO MORE DESTRUCTION OF OUR HISTORY JUST CHECK OUT WHAT HAPPENED IN NORTH CAROLINA YESTERDAY: CRAZED PROTESTERS Pull Down Confederate Statue…What’s Next?

We’re hearing that the Lexington, Kentucky Mayor is jumping on the bandwagon to take down Confederate statues…