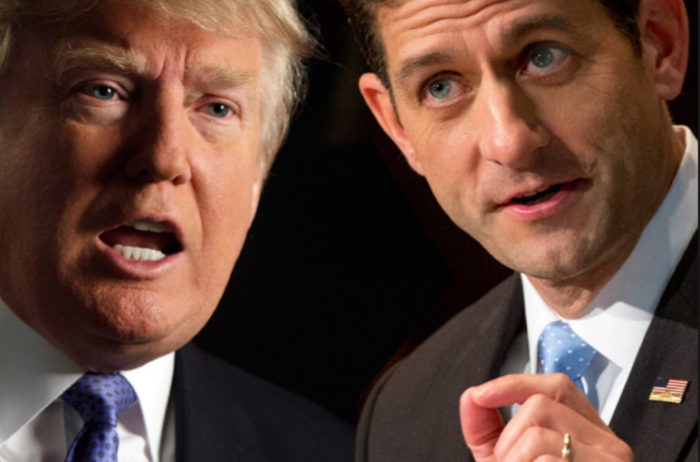 Paul Ryan and the rest want to be in charge. Why? They gave Obama an open checkbook and never even tried to stop him. They need to hush up and do what the people elected them to do.

TGP: PEOTUS Donald Trump is not even in office but that hasn’t stopped fellow Republicans from thwarting his plans.

Earlier this month Trump called out Speaker Paul Ryan on the border wall.

Trump’s campaign was largely powered by his get-tough stance on immigration. A Pew Research Center poll in August found that 79 percent of Trump voters want a border wall, compared with 38 percent of all registered voters.

But among lawmakers in Congress, the desire to build a wall along the entire 1,933-mile border with Mexico has evaporated. Republicans in both chambers instead support more fencing, border patrol agents, drones and other resources to curb illegal entry. House Homeland Security Chairman Michael McCaul said he’ll offer a bill with some of those steps in January.

“Starting next month, the people are going to get what they asked for,” the Texas Republican said Dec. 9 at the Heritage Foundation in Washington, contending that the “border security surge” plan is as good as a wall.

That may not be good enough for Trump, who pushed back after House Speaker Paul Ryan said Dec. 4 on CBS’s “60 Minutes” that “conditions on the ground determine what you need” in different areas of the border.

“We’re going to work on the wall, Paul,” Trump told a cheering audience when the two appeared together Dec. 13 in Wisconsin on the president-elect’s thank-you tour. “We’re going to build the wall, OK? Believe me.”

In a Time magazine interview in early December, Trump didn’t back off a promise to cancel Obama’s executive orders on immigration. But he also said he’ll seek a solution on young undocumented immigrants — known as “Dreamers” after failed legislation to protect them — that will “make people happy and proud.”