This is the biggest political crime in American history, it does not matter who was involved, how big it is, or when it happened. People need to go to prison…

TGP: Senator Chuck Grassley (R-IA), Chairman of the Judiciary Committee, has been investigating the Uranium One scandal for months.

Grassley is expected to ask Attorney General Jeff Sessions about the Russian Uranium One scandal in Wednesday’s hearing. 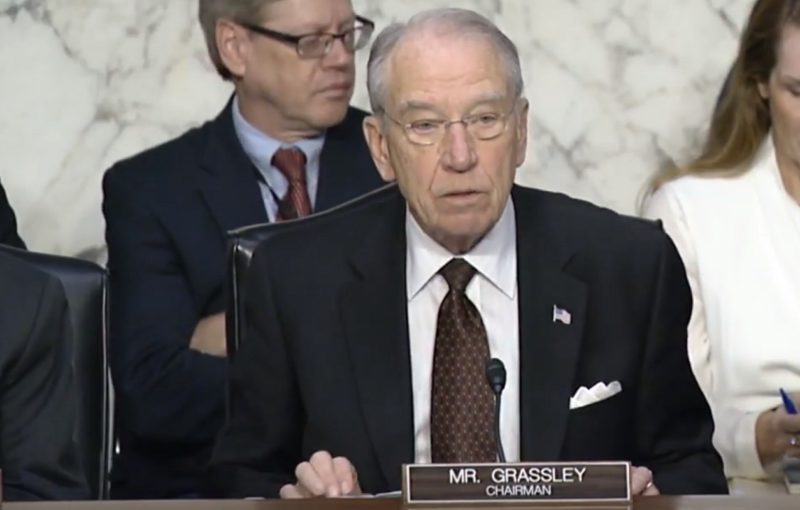 It was reported earlier today that the FBI uncovered Russian bribery of the Clintons in 2009 and the Department of Justice and the FBI sat on this for four more years.

Worse yet, from today’s report we discovered the investigation was supervised by then-U.S. Attorney Rod Rosenstein, who is now President Trump’s Deputy Attorney General, and then-Assistant FBI Director Andrew McCabe, who is now the deputy FBI director under Trump.

John Solomon from Circa News reported tonight that Senator Grassley will question the Attorney General on Wednesday on the Uranium One scandal.

John Solomon: I can confirm tonight. I am reporting this out tonight Senator Grassley, Chairman of the Judiciary Committee, began an investigation last week specifically asking all the CFIUS members did you know there was a criminal investigation. This is going to become one of the most important investigations that is going to evolve this fall.

Senator Charles Grassley has called out the attorney of the former FBI informant to arrange for her client’s testimony before the Senate Judiciary Committee.

Senate Judiciary Chairman Charles Grassley asked the attorney of a former FBI informant Wednesday to allow her client to testify before his committee regarding the FBI’s investigation regarding kickbacks and bribery by the Russian state controlled nuclear company that was approved to purchase twenty percent of United States uranium supply in 2010, Circa has learned.

In a formal letter, Grassley, an Iowa Republican, asked Victoria Toensing, the lawyer representing the former FBI informant, to allow her client, who says he worked as a voluntary informant for the FBI, to be allowed to testify about the “crucial” eyewitness testimony he provided to the FBI regarding members of the Russian subsidiary and other connected players from 2009 until the FBI’s prosecution of the defendants in 2014. Toensing’s client was an American businessman who says he worked for four years undercover as an FBI confidential witness. Toensing said he was blocked by the Obama Justice Department, under then Attorney General Loretta Lynch, about testifying to Congress about his time as an informant for the FBI. He contends that he has pertinent information that the Russian’s were attempting to gain access to former President Bill Clinton and his wife, then Secretary of State Hillary Clinton, to influence the Obama administration’s decision on the purchase of Uranium One, Toensing said.

The FBI informant was actually threatened by the Obama administration for speaking out about the corruption he witnessed while he was providing information.

Toensing said her client “is not only afraid of the Russian people, but he is afraid of the US government because of the threats the Obama administration made against him.”

Also, high-ranking Obama Admin officials KNEW that there was corruption in the Russian nuclear firm and apparently blocked that pertinent information from CFIUS.