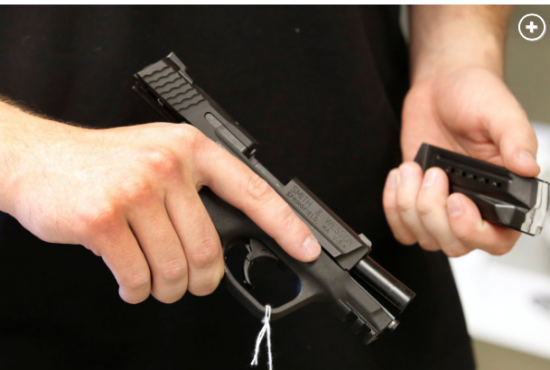 The gun industry is the only industry thriving under Obama. Of course the gunmaker shares are soaring. When no one feels safe, they arm themselves.

Investors on Friday pushed the shares of gunmakers higher in what has become a typical reaction following a mass shooting.

On the day after five police officers in Dallas were killed by a sniper, Smith & Wesson shares gained 2.8 percent, to close at $29.07.

The company’s shares opened trading at an all-time high.

In addition, shares of Taser International, the maker of stun guns and body cameras used by police departments across the country, spiked 5.9 percent, to $27.30.

Digital Ally, a much smaller maker of body cameras, saw its shares soar 62 percent, to $6.69.

The rash of mass shootings and police-related incidents have made gun and body-camera stocks among the market’s best performers this year.

Smith & Wesson, while not in the S&P 500, would, with its 28.7 percent rise this year, rank as the 41st best performer among the index’s stocks, a spokesman for S&P Dow Jones Indices told The Post.

Taser shares have gained 58 percent in 2016, while Digital Ally is up 5.9 percent this year.

The S&P is up 4.1 percent this year as of Friday’s close.

The soaring stock prices are caused by a spike in gun purchases — which are driven, analysts have said, by a fear that Congress will enact tougher gun control measures in response to shootings.

A similar surge in gunmaker shares was seen after the June mass shooting in Orlando, Fla.

Since the Orlando tragedy, gun sales have spiked 40 percent, according to FBI background checks.